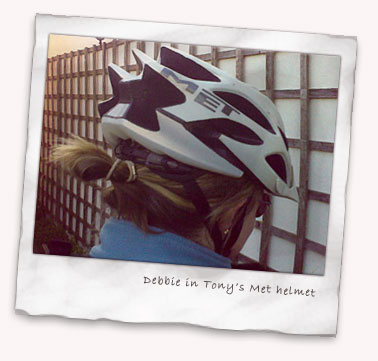 Before my wife Debbie and I had our boy six years ago Debbie and I did a lot of mountain biking but since his birth her desire to get out on the bike reduced since as many of you will know, with little ones there just isn’t time. However since moving to Fetcham she has met the other Femoles™ (significant others of some of the Muddymoles) and her interest has been rekindled, which should be a good thing.

However the first signs of the downside of her new found interest soon came. Having to negotiate who goes out at the weekend with the Moles or Femoles on each day. Not being able to find my best arm warmers or gloves, which I soon found had migrated to her side of the bedroom cupboards. The “my bike’s not working mechanic please fix it” requests. Upgrades to her bike (like trying another Femoles bikes and telling me she wanted disc brakes).

Recently this has upped in pace since she’s been doing more cycling. The Wiggle parcel today contained a nice new set of Transfil cables, a camelback, Endura shorts, Sock-Guy socks, but none for me! (and I’ve got to fit the cables).

This finally came home to me when the last time she went out she had on the wrong helmet—my favourite Met lid—I pointed this out to her and she came out with the line “I just tried it on and it’s much nicer than my old one. It’s mine now! I’ll put some pink stickers on it to make sure you know it’s mine” Cheeky or what. Although obviously Matt would probably like the Metrosexual lid look.

The final point of concern to all you mountain bikers out there with significant others is that she has told me that she really would like a full susser and an Orange Five Diva in Pink would be perfect for her. Dave and I have agreed that this may be a problem for us since Debbie might overtake us on the downhills. Also is it right for your significant other to have more travel than you?

Seriously having Debbie riding more is great and it has more upsides than downsides – for instance she can’t complain when I go out riding. Hopefully we will be able to start soon more riding together, for instance she wants to ride at Afan again. However it’s now a shared hobby again and this alters your budget.