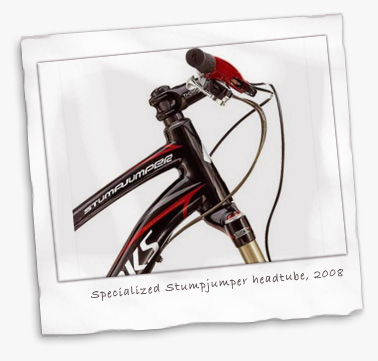 We live, it seems, in interesting times as far as suspension design is concerned. Not so long ago it seemed a straight choice between a simple single pivot design, a Horst link 4-bar or some form of VPP affair.

But things move on and next year’s bikes look to be some of the most innovative for some time. Pictures of the 2008 Specialized Stumpjumper have surfaced on Singletrack magazine, showing sweeping carbon lines and plenty of clever touches.

Admittedly still a derivation of the Horst link that Specialized have championed successfully for years, this time the shock is activated by a fine looking rocker linkage. As you can see in the picture, Specialized have also moved further with integrating the frame to their own suspension technology, with a front fork that is specific to their unique headtube – 1.5″ at the lower cups and 1 1/8th” at the top.

They seem to have missed out on this year’s big trend though, driving the shock from both ends. As we reported recently, Kona have already announced their Magic Link for their 2008 bikes and now Trek have been showing off their new designs which feature a similar philosophy, with the addition of a combined concentric rear axle and pivot, licencing the split-pivot technology presumably from Dave Weagle? 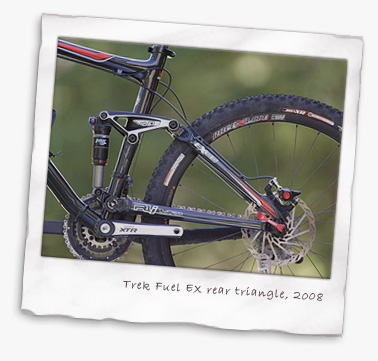 So Kona, Specialized and Trek are all sporting significant steps forward (alright, significant changes then) for their full suspension bikes for 2008. It’s going to be fascinating to ride them and find out what it all means in practice but I’m reminded of one thing. I’ve just bought an Orange Five sporting a good ol’ single pivot set up for two very good reasons. First, it rides great and second, low maintenance. It counts for a lot.

Links to the original articles and photos are below.