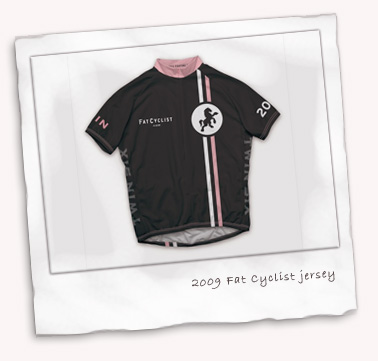 Back in December I posted the article Think Pink, which ultimately encouraged readers to support the Fat Cyclist by buying a 2008 Fat Cyclist jersey. Not only do they look mighty fine but the funds generated are put to very good use.

Since then, two things have happened. First, his 2008 design sold out in something like 24 hours (or seemed to) and second, Fatty’s wife Susan has sadly taken a turn for the worse. There’s not much to say in response to that numbing news except to continue hoping for the best and recognise that despite having far more problems to deal with than the average cyclist ever will, and more pressing demands on his time, Fatty continues to deliver a great website.

If like me you didn’t scrape together the funds in time to get the 2008 jersey, Fatty has just announced the pre-ordering of the 2009 Fat Cyclist jersey, this time round in a slimming black with pink accents in mens and womens sizing. I thought at first it was chocolate brown and pink which would have been even better (and fashionable) but I’ll settle for black.

He doesn’t need me to big up his site. But he needs people to buy his jersey and this time round I’m definitely getting one.