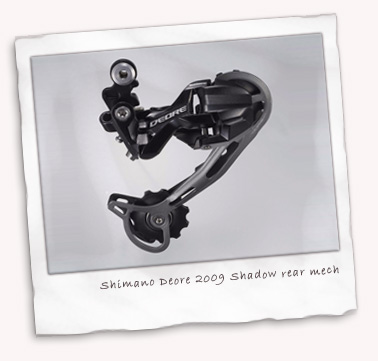 I’m referring of course to the fact that at some time or another we’ve all run bikes with Shimano Deore taking care of gearage duties. Now, after what feels like a long time of relative stasis, Shimano have announced plans to revamp the venerable groupset. I nearly typed venereal there but fortunately stopped myself mentioning the pox in conjunction with a description of Shimano Deore.

Actually, I’ve always thought that within limits (mostly, my wallet) Shimano Deore is a great choice for many riders, especially those starting out down the muddy road (trail). It’s cheap, pretty durable—I once had a set of Deore shifters that lasted me three thousand miles—and in it’s latest incarnation, quite attractive too.

I won’t rehash all the details from the better known news sites like Bikemagic and BikeRadar. Suffice to say there’s now Shadow technology on the rear mech and a chunky angularity to the looks. Brakes look promising entry level hydraulic efforts which should compete well with the Hayes Strokers of this world – if they’re anything like the SLX brakes which are both cheap and highly praised they should be good.

The final touch is the chainset which has outboard bearings (sooo much easier to replace) and steel inner and middle rings which should give them a bigger score in the durability ratings.

So in summary, a cheap groupset which should get you out on the hills for not much money. I would start a cheapo component niche for my old Muirwoods as Tony’s offered me a look in his shed for old wheels but I’m going retro for that with my old STX groupset instead!