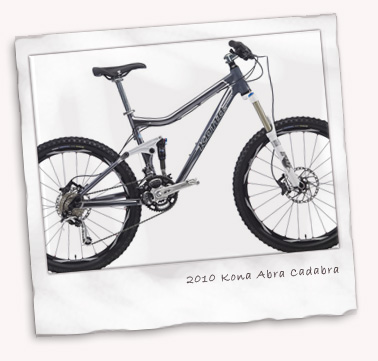 I don’t know about you but every time I hear the name Kona I hear the phrase ‘legendary geometry’ or something similar trotted out. But in reality, I don’t know many people who run Konas so something seems weird to me. That’s not to say I don’t know anyone with Konas and the ones I’ve seen look pretty nice. But they tend to be lower end hardtails rather than more expensive full-sus machines.

I’m not sure why that is really. Maybe Konas just don’t have the kind of ‘want one, want one, want one’ image that people spending big bucks on bikes tend to look for; perhaps it’s the Evans/Halfords effect?

I won’t be suckered into saying that’s all about to change but the latest Kona full-sus, the Abra Cadabra looks like quite a nice machine. Equipped with a version of Kona’s Magic Link suspension design, which keeps travel short and geometry tight for climbing but ‘magically’ finds an extra inch when you’re pointing downhill, this 5″+1″ travel ‘all mountain’ bike looks interesting.

It comes with a neat Scandium frame, a bolt-through Fox Float RL 150mm fork and a mix of XT and SLX running gear as well as a wide range of sizes to suit everyone. What is particularly unusual, as BikeMagic points out, is the very steep seat tube (74.8°) versus a slacker 69° tapered headtube. 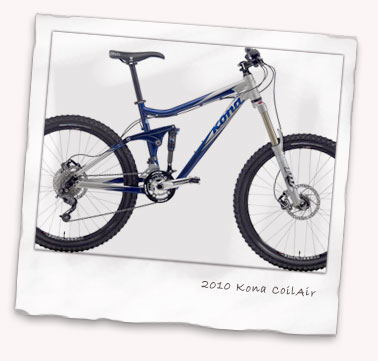 The 2010 CoilAir also makes use of a refined Magic Link set up (and a lighter frame) to offer 6″+1″ of travel, this time with a Fox 36 Float R up front in another tapered headtube. Far too much for our Surrey Hills but it certainly looks like fun…