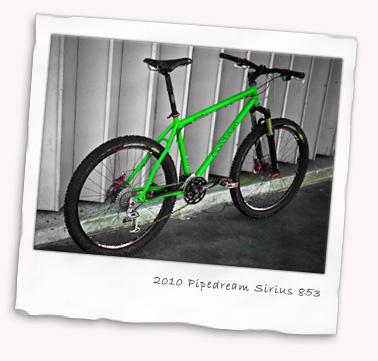 For a long time the world of niche hardtail frame makers has been dominated – at least in the UK – by On-one and Cotic. If you’re on a budget, On-one are your friend, if you want to indulge then Cotic can oblige.

But they are not the only frame makers out there. Unfortunately for the others, On-one and Cotic have been most adept at marketing a good product at the expense of those manufacturers who are less media savvy.

Perhaps that’s about to change in a small way? Pipedream, long-time purveyors of budget frames, have recently launched their 2010 Sirius frame which is made from the usual Cotic-style mix of Reynolds 853 and 4130 steel tubes. What’s notable here, in addition to the sensuous curvage of the seatstays and bridgeless chain stays is that the dropouts offer enough slidage fore and aft to allow for singlespeeding or gears depending on your predelictions.

But the most significant aspect of the 2010 Pipedream Sirius is that it retails for just £295 which it has to be said appears something of a bargain versus the Cotic Soul’s £470. Admittedly, the Soul was my fave from last year’s Cycle Show, offering both tried and tested performance and a simply gorgeous paintjob but it’s clear the Pipedream has the potential to rock the boat a little.

If nothing else it offers those ever-fickle consumers something different to buy and that’s no bad thing in itself. I love my On-one but it’s hardly unique even if the rider is ‘special’.

What’s key is for Pipedream to demonstrate the quality of their goods, via strong brand personality and quality product. Their website is certainly punching above it’s weight with a slick look and plenty of social media links – things have come a long way from the basic website of yore. But what they need is to push that brand consistently beyond relying on the odd mainstream publication product review.

I hope they succeed and that others – such as Pashley and Curtis – can step up to the plate too. The steel hardtail market is oddly niche in that large manufacturers don’t seem to build them, yet seems to provide steadfastly conventional product which us Brits lap up.

I don’t believe for a minute there’s anything particularly different about our riding compared to other parts of the world so either we’re wrong or others are missing the point.

Love the Kawasaki green too by the way!