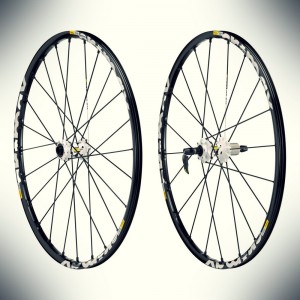 Generally speaking, losing weight is good for you. Lighter is better, or so they say and this applies just as much to mountain bikes as it does to so-called celebrities ‘papped on a beach somewhere far from these rain-washed shores.

But what’s important is how you lose the weight.

Take rotating mass for example. This seems to be considered the best weight to lose since it takes more effort to keep a heavy weight moving than a light one. When it comes to mountain bikes, that means wheels are the obvious place to lose weight, and my experience with my Stans Crest wheelset seems to bear this out.

The benefits from a lighter wheelset (all other things being equal) are arguably more pronounced for 29er wheels, so it’s interesting to see Mavic’s latest 29er Crossmax wheelsets for 2013 being announced.

I’m not going to go into the details of what they’ve done to reduce weight (BikeRumor have a much more indepth article on the 2013 Crossmax 29ers) but suffice to say the new wheels are both very light and versatile in accommodating lots of different axle and hub standards.

The model which caught my eye as being particularly enticing is the Crossmax ST which comes in at 1710g in weight for the pair, which is a great weight for a 29er. I know the Crossmax SLR looks better and is even lighter at 1620g but it’s more race focussed than the All Mountain ST and it costs more too.

On the subject of price, current 2012 Crossmax ST wheels retail at £660 in the UK so these are not a cheapy-cheap option but they promise to be super strong and are fully tubeless compatible without the need for a rim strip so reliability is likely to be high.

Of course, there’s other options out there – Stans, as previously mentioned and Sun Ringle (who licence Stans profiles), plus WTB and Shimano all offer 29er wheels at decent weights and a variety of prices. But if you do plan to upgrade your bike, look to your wheels first.