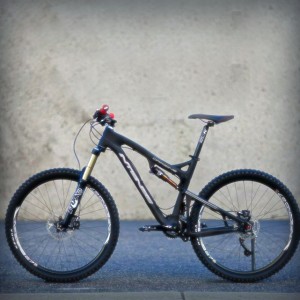 So. Unless you’ve been in a cave somewhere you’ll have heard of 29ers. Big wheels on mountain bikes which run out at roughly 29 inches when you take the wheel and tyre into consideration, versus the ‘traditional’ mountain bike wheel size of 26 inches.

Lots of people seem to like them, but some people don’t. Maybe an in-between size might give you the best of both worlds?

For a long time, there’s been a lot of talk of some kind of halfway house, based on the old French touring wheelsize of 650b. The logic is you might get something of the speed and stability of 29ers with the agility and strength of 26 inch wheels.

With 650b, the effective wheelsize works out at roughly 27.5 inches which sits nicely in between the two extremes. What no-one at this stage really knows outside the bike manufacturers is how these bikes will actually ride. A sublime mix of the best of both worlds, or some kind of neither-fish-nor-foul beast?

Now it looks as though we might get to find out as the idea has some just got some proper backing from Intense Cycles, according to Bikemagic.

And they won’t be the last, with a lot more manufacturers rumoured to be launching 650b bikes soon. The wheel size is suggested to be especially suitable for long travel trail bikes as the 29er size limits the amount of practical travel you can get from a frame.

Intense have announced two of their most popular bikes (the Carbine and the Tracer) are now available with 650b wheels and in the process have shown that both Rock Shox will be offering 650b forks, and that Kenda will also have 650b tyres in their product line up.

We already know Schwalbe will be doing suitable tyres and that Fox will be making 650b forks too, so if you haven’t spotted a bandwagon yet you have your eyes shut.

There’s a lot of marketing in this admittedly. Many manufacturers got caught out when the beardy-weirdy 29er wheel size went mainstream over the past few seasons and there’s no way they want to miss out this time.

But so far, what do we know?

No-one I know has ridden a 650b so this might be a paradigm shift in the industry which sees 26ers disappear, or it might be total rubbish. Everyone I’ve spoken to in a bike shop has scoffed at the idea (as they did with 29ers I remember), so we’ll have to see how things pan out.