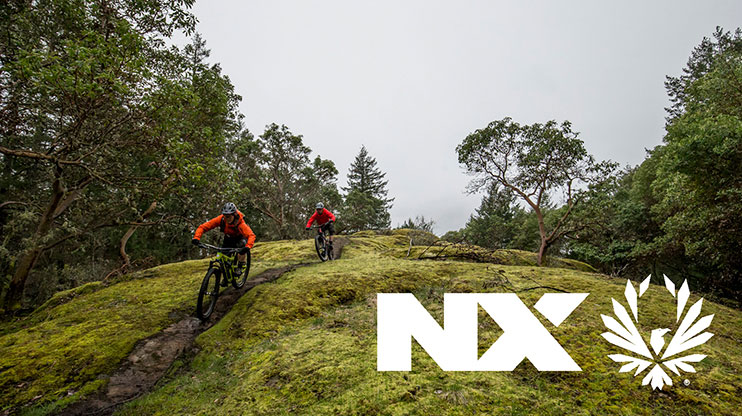 Do these guys (or gals) look like cheapskates to you?

No, me neither. So rather than being cheap, they look like they are riders who appreciate the ‘ease of entry’ that SRAM NX Eagle brings to the 12-speed ecosystem.

SRAM would certainly like you to think that at least, rather than look at the £365 all-in price and say ‘Wow! that’s cheap!’ But it certainly is cheap for a 12 speed 1x drivetrain and it is likely to be a popular upgrade for all those 9/10/11 speed bikes with 2x and 3x drivetrains out there. This is because the cassette is compatible with old-school Shimano freehubs.

I find it hard to imagine someone running a retro 26″ wheeled hardtail with a 12 speed set-up but it’s certainly possible. More likely though, this is going to be an increasingly common site on lots of new bikes next year. Including on gravel and adventure bikes.

In the space of a few paragraphs you’ll notice I’ve use the words ‘cheap’ and ‘common’ to describe SRAM’s new NX drivetrain, which seems a bit harsh. Actually, I’m expecting it to be rather excellent. 12 speeds should offer sufficient gears even for a spinner like myself.

I know 12-speed has been available for a while now but so far it’s been pretty expensive. SRAM and Shimano both offer 12 speed systems, although Shimano are really in catch-up mode at the moment. I wonder how long it will be before they are able to offer similarly competitively priced 12 speed options?

Also worth noting is that since I’ve been mountain biking drivetrains have gone from 7, to 8, to 9, to 10, to 11 and now 12-speed – both on road bikes and MTB. Is it far fetched to think we might see 13-speeds at some point?

Finally, in case you were wondering why SRAM Eagle tech is called Eagle? It’s because an Eagle is an apex predator apparently, the top of the tree. Eagles also have a range of up to 500 miles a day which translates nicely into SRAM’s 500% gear range and all-day rideability from the 12-speed set-up. Now you know!

If you want to find out more, have a read of Singletrack’s SRAM NX Eagle 12 speed article.