The mountain bike world hasn’t been immune from the effects of technology over the years; in fact, in many ways it’s thrived on the advancement of our collective know-how. After all, we now have 29ers don’t we? 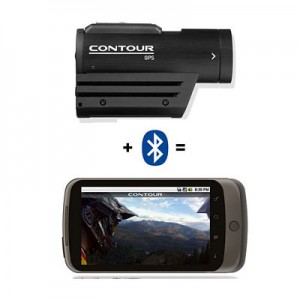 One big trend over the past 18 months affecting our innocent woodland adventures has been the use and integration of phones to track our activities and there’s now many apps out the to tell you how far, fast and where you’ve been.

I suggest you keep that quiet from your other half or they’ll be able to go online see that most of our rides consist of ‘rest and recuperation’!

A new development has been to take data from separate sources and integrate into those apps. Heart rate monitors are starting to do this, beaming their exercise data to your phone so you have all that information in one place thanks to Bluetooth technology.

It makes me wonder how long before accelerometers in or on the bike itself are included to tell you that you mash the pedals too hard or need to brake more smoothly?

One innovative use of the phone/bluetooth combo has appeared at the 2011 CES (Consumer Electronics Show) in the US with Contour announcing that their ContourGPS ‘hands-free’ camera will now beam live footage to your camera so you can, err, see what you’re riding.

Well, maybe it’s still best to keep your eyes on the prize (or rather the trail), but at least this solves one of the perennial problems of helmet cams which is that due to the fact it’s on your crash helmet you often have absolutely no idea what you’re filming until you get home and realise you’ve got a whole heap of tree canopy footage.

So you can use the live footage to position your helmet cam just so. The built GPS data of the camera also allows you to plot where you were at any given time during shooting of your gnarly epic.

Or you could leave your phone at home and once again your other half can see how little exercise you’re really doing! Maybe this technology thing isn’t such a great idea after all…