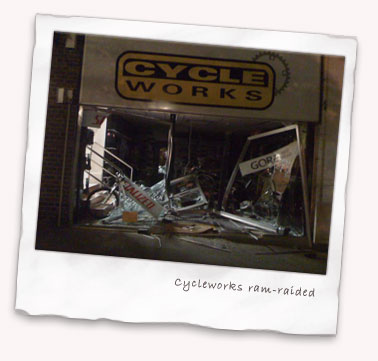 On popping into Leatherhead to pick up a part from Cycleworks I was drawn to the large expanse of shuttering ply that was covering their newer shop front. Yep, the low life of society has been at it again.

I found a rather tired and dejected Dave in the shop. Tired because he’d been there since just after 2am when a van backed into the shop window. The low life took 5 bikes, a frame and a pair of forks. All the bikes were Specialized demo bikes which as some of you will know are special colour schemes and have “Demo” under the laquer.

This means the value of the theft is secondary to the damage caused to the shop front and the rest of the stock that got knocked over in the theft. Not to mention the mess and the fact they’ll be finding glass for months if not years to come.

The bikes and items stolen were:

Here’s a PDF with images of the bikes stolen.