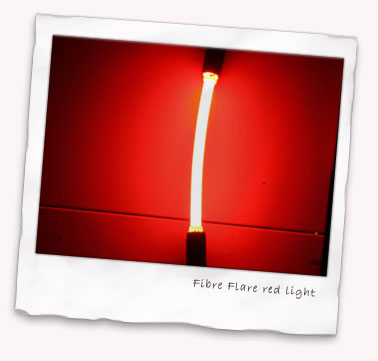 Speculating before the long winter nights I thought the thing that would keep me going best over the months of darkness would be decent bike lights. And I put my money where my mouth was, with a new Exposure MaXx-D front light and more recently a Blackburn Mars 4.0 1w LED rear light. Both these lights have drawn unprompted responses from people.

A van driver, seeing me riding at about 8:00am in daylight slowed his oncoming vehicle, wound his window down down and complimented me on it’s effectiveness. Robustly; as in ‘Oi!! Turn that f**king light off you c**t you’re f**king blinding me!!!’

At least he saw me… As for the rear light, my riding buddies are more restrained but no less emphatic about it’s effectiveness when they’re following me at night, to the extent that I tend to use it only for road sections. It’s seriously bright.

All that as may be, as you can see from the photo above there’s a new rear light on the market called the Fibre Flare which uses – well, I’m not sure really. I think it’s LEDs shining down some specially designed optical fibre which refracts the light out to seeming great effect. It’s definitely bendy as the Fibre Flare pics and details tell over on BikeRadar and it has two crocodile clips at either end so you can attach it to just about anything including clothing and backpacks.

Looks worth a bit more investigation I reckon but seems a bit pricey at a penny shy of £30.