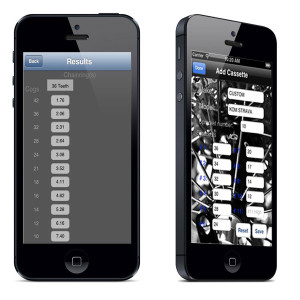 This one is for Paul really, assuming he owns either an iPhone or an iPad. Well maybe not just Paul, but for anyone really who likes to spend time fretting over gear ratios.

iGear have just launched this nifty free app for calculating bicycle gear ratios. You enter your drivetrain spec and it tells you how many gear inches you’re pulling in each gear; or if you are a singlespeeder, or a 1x rider you can see what effect changing the front chainring has which could be useful, especially if you’re switching from 26 to 29 (or even 27.5) inch wheels and you want to achieve similar ratios.

Assuming you’re unable to do this with a bit of paper and a calculator, and are interested in discovering this sort of information, this looks to be just the thing for you!