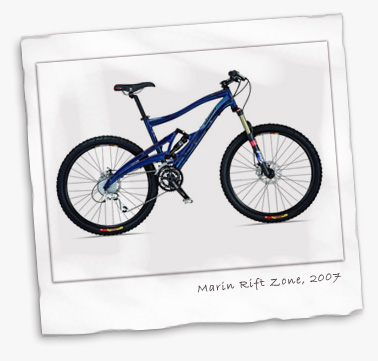 So Marin have finally released information about their 2007 bikes (well, to date the US site has been updated anyway) and what a great line up it is too.

The real news this year is the switch to a hydroformed monocoque for the frames rather than the old seam welded flying ‘V’ that is such a familiar site on the trails. Visually this has delivered a far more attractive looking bike with a certain Nomadic swoopiness to it that is likely to prove popular.

At the same time, the XC bikes have morphed into five inch travel trail munchers which is sure to divide opinion, especially amongst the racing community. It’s not that long ago that this kind of travel gained you entry into a fairly exclusive club of hardcore freeride bikes but now it seems that the jey crowd can come and play too. What it really means is application of the Whyte E5 suspension configuration to a wider market and that’s great to see.

The old adjustable travel TARA bikes have also had the goalposts shifted considerably. No longer is the travel adjustable for a start, which seems a pretty significant move suggesting that Marin now feel most riders will find the Quad XC bikes to be an acceptable compromise. Instead, the TARA range has shrunk to just one bike, fixed at six inches of travel but with adjustable geometry (and bottom bracket height) that ranges from slack to slacker still for those that want to concentrate on their downhill thrills.

Taken all together and with a new range of colours that have a far more contemporary feel to them this new range looks very competitive and commercially aggressive, most noticeably because the bikes appear at first glance to eschew the traditional XC race community and offer far more from an aesthetic viewpoint than previously.

So it comes as a surprise at this point to hear that Jon Whyte, their well known star suspension designer, has decided to throw in the towel and retire from the bike industry (not retire from Marin but the bike industry as a whole). How that impacts on his own brand of bikes is not clear.

Should we take this at face value or should we in the sceptical tradition start looking for conspiracy theories? Certainly it appears that Jon is not actively being credited with the new hydroformed looks (that accolade goes to Ian Alexander) in a way that hints at a difference of opinion behind the scenes. We’ll just have to see over the coming months if there’s more to this than meets the eye. What is beyond doubt though is that this is both unexpected and a massive loss to Marin who have for years quietly traded on the ‘we have an ex-Formula 1 designer working on our bikes’ litany.

As a Marin owner, I’d like to wish both parties well for the future.