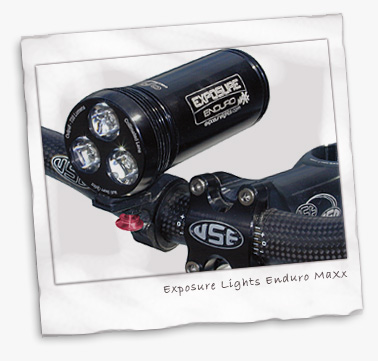 The subject of lighting is getting more and more important as we head toward longer evenings, and I’ve already mentioned recently our own efforts at trying to find the ideal set-up.

More news on that in due course, but just when you think you have it all covered along comes another product to make you think again. This time, Exposure Lights have announced a new range of high output LED based lights but using Seoul emitters rather than the Luxeon Vs. With the top end Enduro MaXx chucking out 720 lumens, that’s a lot of light (in theory more than a HID), all wrapped up in Exposure’s traditional neat aluminium handlebar mounted case.

Thinking again is something you’ll definitely be doing when you see the price, £299 is a lot of money for a torch as Nicola commented recently. But with up to 3 hours burn time available on full power it sounds an interesting prospect and possibly worth spending some beer tokens on.

I’m quite tempted by the Joystick MaXx which runs just one LED but with 240 lumens could be a great choice for my crash helmet with my Hope HID on the bars. Talking of which, we were out last night and running the HID meant I basically was able to keep going at my daylight pace. I didn’t realise it until noticed I kept leaving Dave and Nicola behind!

We’ll try and see if we can borrow one when it comes into stock with our LBS so we can give you more info.