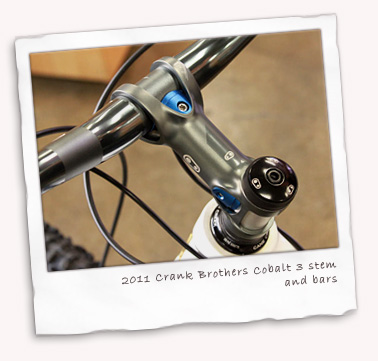 Well, aside from the fact that title was a bit of a mouthful, what do people think? Do you like this? I mean the image below, not my rather ham-fisted attempt at alliteration of course.

I rather think I very much do like this, a lot.

Crank Brothers have continued their seemingly inexorable push into the component market, to the extent I wonder just how much a fully Crank’d bike is likely to cost. It can’t be cheap. Starting with wheels, seatposts, pedals, QR skewers and headsets you can now add a stem, bars, grips and a seatclamp to the mix, creating the possibility of a full-on boutique bike.

Or, mix and match to suit your budget and aesthetic inclination. Personally, I like the idea and look of the new Cobalt stem you see above which takes a novel (but not unique) approach to clamping the bars and steerer tubes using expanding wedges. It’s an elegant solution which Thomson have tried themselves in the past but here it has been used to great effect to lever in some jewel-like colour contrast into quite a mundane item.

Are Crank Brothers the Apple of the MTB world? Possibly.

The new Iodine stems (not shown) are more adventurous in some ways, with an unusual (and visually not entirely successful) sliding faceplate which I think the jury may have to retire to consider at length. 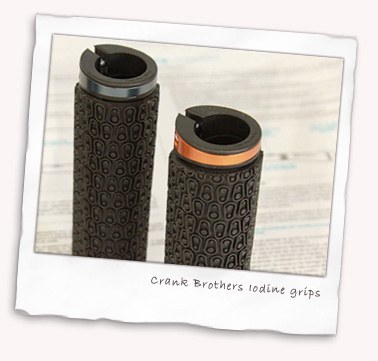 More successful are the Iodine grips which feature repeating Crank Brothers logos which appear to offer both a visual treat and a practical surface to hang on to.

Plenty more details across the web, but Bikeradar has a good round up if you want to find out more about the new Crank Brothers stems, bars, seatposts and grips.