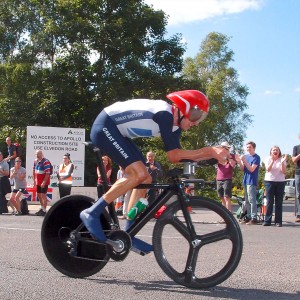 Unless you have been living in a cave (without wifi, radio, TV, post…) for the past couple of years, you will know that the Olympics Road Cycling Race was coming to the Mole Valley. An opportunity to get involved was not to be missed and after careful pre-planning at last year’s Surrey Cycle classic, the Moles were ready for the Olympics.

After more than quite a few emails a Mole plan was hatched. The spot chosen to meet for the mens Road Race was the corner at Mickleham as the race turned off the A24 to Old London Road and headed for the Box Hill climb. The idea being that after a fast section of tarmac the riders would need to brake to make the turn, giving us a few extra seconds to see them.

After the Surrey Cycle classic Jem had come up with a ‘a cunning plan‘. Decorators platforms! So with the spot chosen and the decorators platforms bought/found we headed off. MuddyJohn was the most organised, nabbing a spot at the barriers with a super early start, although the “towels on the sun loungers” award went to the Norwegians and my wife’s work colleague who camped on the centre of the dual carriageway overnight. Nutters!

I met up with Dave and Cathie at Norbury timber mill, with a decorator’s platform on my rucksack and Dave with his decorator’s platform on a bike rack. Since this is the Muddymoles report,  I can tell you that I was on my Alfine On-One, Dave on an old Giant full susser, Kathy on her On-One plus the 200yds of bridleway we headed down was dry, dusty and slightly loose on the corner. Back to the road cyling! As we got to our chosen spot the areas by the barriers were taken but we just put up the platforms and the view was excellent. The guys next to us were certainly getting into the spirit, or cans to be precise and it was only 8:30am.

The organisation for the Road Race was good. We were well catered for with many food vans and mobile toilets. The police were there in numbers and everyone was in a jovial mood in anticipation of medal success in a few hours time. 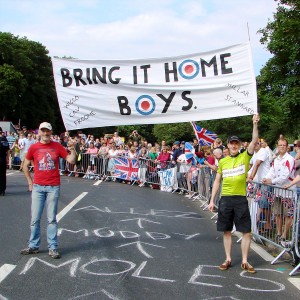 The Road Race was scheduled to get to us first at 11:45am, the sun was out and soon many more Moles had arrived: Debbie and Alex (Mrs and boy), then Muddy Matt and family, Muddy Mark and family and Jem (with more platforms) and friends. Other moles were nearby on the course. I think that at one point our four platforms had about 15 people on them!

One notable moment in the morning was when we met Richard Sterry  http://richardsterry.blogspot.co.uk/ His t-shirt said it all. South Downs Way, triple, 36hours, 300miles, 30,000ft. An amazing effort and a very nice guy to stop and talk to. Even for those of us moles who have struggled to do the SDW in a day once it was hard to imagine the SDW triple.

As the race got nearer the crowds massed and the excitement built up. Every police cyclist that came around the course (some decent cornering from the plod) got a great cheer.

Soon the Police motorbike riders were coming through, high fiving crowds, the commissaries’ bikes, the helicoptors were overhead, then finally the camera bike and 5-6 riders in a breakaway.

At this point I expected to keep up with the news on my phone, but so did hundreds of thousands of other in the Box Hill area alone and 3G was non-existent.  The only way that we could tell how the race was going were texts sent to members of the crowds and rumours heading around.

I heard later that sitting at home watching the action on the TV the stream of information wasn’t much better.

We could though see the peloton helicopter in the distance so we knew that the breakway had a good gap, but the wait seemed to stretch and stretch, until after more than 5 mins the peloton came into view with team GB on the front in team time trial mode, looking super. 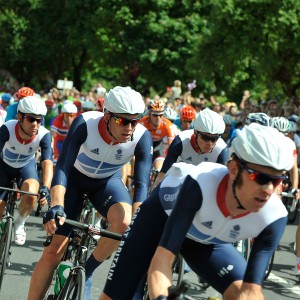 The time seemed to then pass quickly as the 9 circuits of Box Hill counted down. With dropped riders coming through, we were never waiting for riders but the breakaway and peloton were soon back round with the gap reducing every time.

All too soon the racing was over and we rushed back to see the final part of the race on TV, which I caught as the riders rode through (well except Fabian Cancellara) Richmond park. The less said about the result the better! However a top effort by the Team GB. Five riders to control a peloton that size is always a tough ask.

The next morning – the Womens Road Race started with a beautiful clear sky and sunshine. Matt and I took advantage to get up early and ride round the Box Hill circuit. We weren’t able to get up Box Hill so we had to head round to the pig that is Pebblecombe, but we were able to ride the rest of the circuit. After a coffee at Ali’s on Headley Common the closed roads meant that Tot Hill and down past Tyrells Wood golf course were 45mph blasts and finally the one way system in Leatherhead proved to be a brilliant course when ridden the wrong way round!

The weather didn’t last on the Sunday morning with some very heavy showers late morning and we were considering missing the two Box Hill loops for the Womens Road Race. However we made a last minute decision to go, you don’t get a second chance and we got to the A24/Young St roundabout with 30mins to go. Once again the decorators platforms proved their worth and we got a great view. The most exciting part being close by as the break away with Vos and Armistead formed. We just got home before the rain came down and sat down to watch the nail biting finish. At 23 Armistead is going to be a great cyclist for the future. 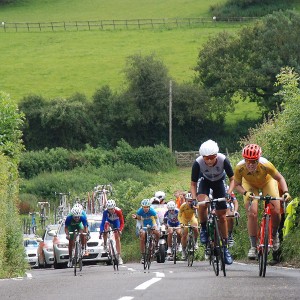 That left the Time Trial on the Wednesday. Matt, Dave and I met up in Fetcham, again in the sunshine and this time cycled in the opposite direction to Cobham to catch the TT on the Portsmouth Rd, at the Fairmile junction. The crowds weren’t as big as the weekend Road Race crowds on Box Hill but the route was lined the whole way and again the atmosphere great. Soon Darren joined us too. With riders coming past every 90secs there was always plenty to see. The TT really showed the difference in style, position, effort and kit that the different riders adopted. 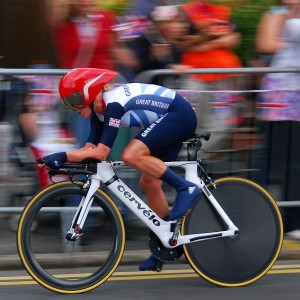 Kirsten Armstrong was clearly the best of the women and as Jan Ullrich has said eariler in the day of the riders “there are the good, the great and Wiggins”. He looked amazing as he came past our position. We knew he was leading the time gaps, so the crowd was absolutely cheering him on. Another fabulous day out.

I might have been highly disappointed at the Road Race result (Vino is my absolute least favourite rider – a rider who doesn’t condemn drug usage) but the Saturday was brilliant, we did fantastically well in the Womens Road Race and of course the Mens TT.  What can you say about Wiggo (Sir Wiggo?).

How often does the Olympics come to your town? With your favourite sport? With a millon by the roadside and you get to watch it not just once but 3 times. These were days like no others for the Moles.