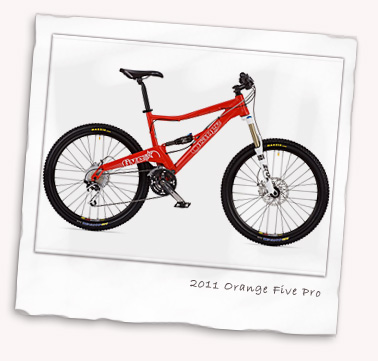 How often can it be said that the Surrey Hills has had an impact on the design of an iconic brand? I guess Mike at Dialled Bikes would be waving his hand in the air at this point, but great as the DB stable is, it remains a fairly niche brand.

Orange on the other hand, needs no introduction, especially round these parts.

So what’s the connection? Well, Dave from Cycleworks contacted Orange last year with his ideas for some improvements to the Five frame and Orange liked his suggestions so much they agreed to trial them across some prototype frames. As a result Dave has been running one of these for some time, as first reported on this website.

Subsequently, various magazines have got hold of sample frames and have very much liked what they see. So it comes as no surprise that the 2011 Orange Five lineup now has these features as standard. We can thank Dave for this, at least in part, which I find quite amusing as one of the original All-Mountain brands from up North takes advice from the weekend warrior Surrey Set!

That’s not to say Dave is unqualified to give advice, he’s raced and ridden just about everything over the years and knows what he’s talking about. Credit also to Orange for recognising good ideas wherever they come from.

In brief, the changes to the 2011 Five frames consist of a tapered headtube to help stiffen up the front end for the bike, together with a zero stack headset to keep the front low and wieldy. There’s a larger seat tube to allow fitting of seat-dropper seatposts that are now very popular, as well as cable guides to keep things tidy. And finally, the frame comes with ISCG tabs to allow fitting of chain devices. I’ve no idea whether a Hammerschmidt crank would be suitable given the pivot position but you can at least fit those now!

All in all, quite significant improvements which should help keep the Five at the top of its game. I have a 2007 Five and have noticed subtle changes to the frames since then but this has actually got me thinking it’s worth upgrading; even though I still love riding my Five.

The 2011 Five bikes will be in stock at Cycleworks within a couple of weeks I believe, so give them a call if you’re interested.