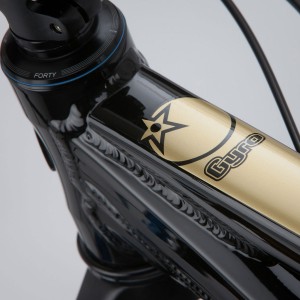 Orange Mountain Bikes have finally released their first 29er bike, a full sus trail bike called the Gyro. While clearly based on the Orange Five, it provides less travels with bigger wheels so depending how you want to call it you’re getting more for your money, or less.

How much travel are we talking about? 110mm at the rear and 120mm at the front of the Gyro, compared to 140mm on the rear of the Five and up to 160mm on the front. Close, but distinctly different.

The jury no longer seems to be out on 29ers. People really seem to have got the point, and with publications like Bikeradar raving about the new Santa Cruz Tallboy LTc it seems there really must be quantifiable benefits from running big wheels. I wouldn’t go so far as to say you go faster with less effort but based on my experiences with the Inbred 29er on rigid forks, there’s a distinct element of skill compensation going on with 29ers. Mind you, to go fast on any bike takes something, but you know what I mean.

Orange effectively say in their press release they didn’t produce a 29er sooner because they wanted to be sure of the benefits. Well, didn’t we all? The truth is the market now pretty much demands a 29er on the books of some form and it takes time for a small company to design, manufacture and test a new concept, so it’s not surprising Orange wanted to be sure they were going to get a return on their R&D. 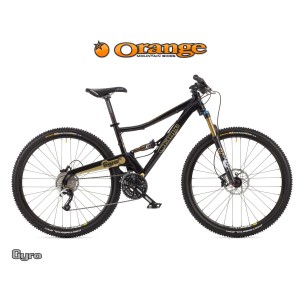 But better late than never. We saw a prototype of the new Gyro at the Cycleworks Demo Day in early March and while the production frames are 0.5 a degree slacker on the headtube, Dave seemed to think it felt like a pretty capable machine. I don’t they will have any trouble shifting the first production run of bikes (which are all the black’n’gold JPS ‘colorway’) as reason would suggest that a 29er version of the Five should be both fast and fun. Or make that faster and more fun?

As a 2007 Five owner, I hope this new machine is a success. I do have three reservations about both the Five and this new Gyro. First off, I can’t help but think there might be significant benefits from producing a carbon version of these bikes, as Santa Cruz have done with their machines, although I’d guess there’s a fearsome cost involved in building skill in this area. But with the UK being the centre of F1 there’s a fair bit of composite expertise around.

Second, the current design of the frame limits the ability to run a true 2×10 setup as there’s a chance the pivot bearing fouls the chainline; added to which the pivot is optimised to work for 32T. According to Orange, running something like 39/26 moves the chain away from this optimal point to the detriment of suspension performance. As someone who normally rides either in the 32T or 44T I’m not sure I’d notice a significant problem but on paper the risk is there.

Finally, that name Gyro. I don’t like it at all. I can see it’s supposed to refer to the gyroscopic effect of large wheels but to me it sounds more like Giro, as in a pensioner collecting their bank giro. I’m not sure I want to sound like an mtb’ing pensioner! I’d have preferred something like an Orange Pealer I think but I wonder if anyone has any better ideas?