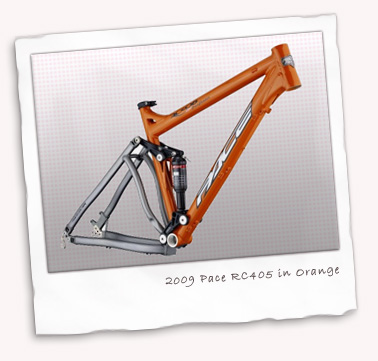 I’ve just been reading on Singletrack magazine about the latest incarnation of the Pace 405.

It’s now available in three different colours which look superb. I particularly like the orange version you see here but reckon Khaki is quite striking too. It’s always been a bike I quite fancy the look of and now they’ve added colour to the mix I reckon it could tip the balance (supposing I was ever in the market for one).

It’s a bike that’s always had solid reviews and has a bit of a cult following – which means you don’t see many on the trails for some reason. Maybe it’s a regional thing but us Southerners are not normally slow to adopt high end frames. As a rule.

I for one hope to see more of these and would love the chance to test one against my Five which continues to impress after a winter on the hardtail. Anyone who reckons single pivot bikes have had their day should remember that a good bike is based on a lot more than the number of pivots.

Anyway, I hope Pace sell a few more based on these colours. The Pace Cycles website appears to have recently been hacked but I’m linking to it anyway.