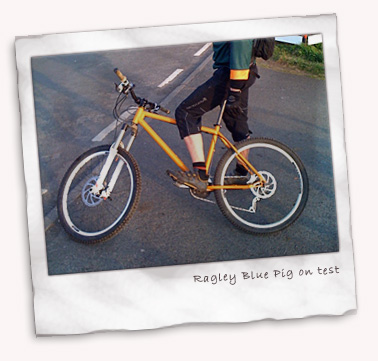 Well, I couldn’t resist an open invitation to me and others to blog this. Although that might just have been Ed talking to Brant. Whatever, with the Ragley frames almost as talked about on this site as Inbreds and Fives, it seems we’re becoming something of a fanboy site for anything made near Halifax. Strange really because Tony’s write up about his 2009 Trek EX 8 review is actually the most read post over the past month or so!

So there you have it, a rather sharp looking frame in mellow orange (or yellow if you will) which I have to say looks very tasty indeed. In all the fuss over colour it’s easy to overlook this bike’s promised capabilities, in fact so far I don’t even think I’ve seen anyone ask what forks it will take!

From what I can make out without actually confirming this with Ragley bikes the frame seems designed for anything around the 130-150mm mark – i.e. most modern long travel forks. The headtube reinforcement (which appears to be very nicely done with a subtle tapering from back to front) clearly suggests the intention for this bike to live with a bit of aggro, as does the one-piece seatstay bridge. Built tough as they say.

There’s still the unusual chainstay arrangement on the driveside which becomes less odd the more you see it and those lovely elongated dropouts. Plus don’t forget the funky cable guides which makes this frame more than just a breathed on On-one.

I do like that colour though. From the moment I got my Five in Sub Zero Blue I’ve completely changed my attitude toward bike colours. It used to be black and grey was the thing to have with a splash of colour on the forks but since DaveP trailblazed with his lime green Five I’m of the opinion that nice solid non-metallic colours are the way to go. They look eye catching and no-nonsense at the same time. Let’s hope it makes production.