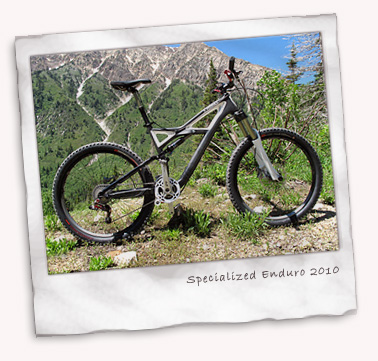 A week or so back I covered Marin’s 2010 line-up and mentioned at the time that Specialized had released some details too. Well here’s some information; you’ve probably seen it elsewhere if you’re keen but it’s nice to have it here on the Muddymoles too.

Actually, not many of us run Specialized. OK< that’s not strictly true as they’re not uncommon but not a ‘core’ bike for us either. In our midst we have a Stumpjumper hardtail, a Pitch Pro and now an Epic or two so they’re hardly under represented. What’s coming next year then?

Well, to start off, there’s another new Enduro, making use of last year’s Epic suspension layout. But it has 160mm of travel front and rear, has a replaceable ISCG chain mount (very clever) and is a stiffer frame all round. So that’ll be nicely Hammerschmidt-able then.

Shock wise, the rear is a Fox unit but Specialized have continued with their own front suspension with a single crown effort that cover 135-160mm travel with a tapered steerer. It also weighs in at 4.1lbs and has a Maxle-Lite bolt-through dropout so sounds like a very competitve fork.

I’m not exactly struck by the monochrome black and white frame detailing this year but maybe it’ll grow on me. If you’re going to use the of-the-moment coloured-component smorgasbord then I guess a monochrome frame makes sense in the name of decency. 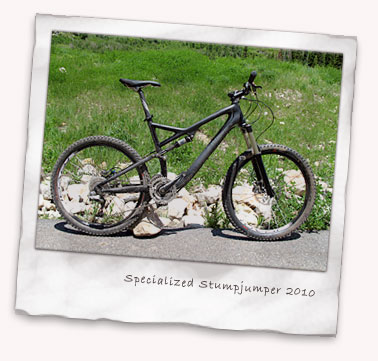 The Stumpjumper also benefits from the work on the 2009 Epic’s suspension, ditching the split seatpost idea (I hope for good). Somehow, no matter how well it’s done I can’t help thinking a split seatpost equates to a Halfords special. That’s prejudice for you!

As with the Enduro, the fork is a Specialized Futureshock unit, this time at 115-140mm travel. From what I can make out, the bike is also available in 30 speed set up with a 10 speed block and XTR derailleur which is, ummm interesting. Not one for me though with our Surrey mud…

For the increasingly mainstream 29er fraternity (oh dear, I’ve spent too long looking at Dave’s bikes!) there’s a new Epic 29er and Stumpjumper 29er which goes to show how popular this wheelsize is getting even if suspension travel is reduced versus 26″ versions. If you’re covering ground rather than styling it at the bike park I reckon there’s a lot going for 29ers. But I’m still holding out for 650B (ha! ha!).

Plenty of background is available on the Bike magazine website and on Singletrack, with Bike in particular having some quite detailed pictures.