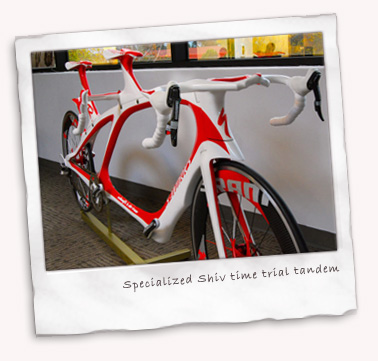 Ho! Ho! Ho! Well, wouldn’t Santa be pretty pleased if he replaced that creaky old sleigh with one of these? First off, it’s got the right colour scheme and these things are important. It looks fast standing still.

Ok, so it wouldn’t have the capacity of a large sleigh pulled by eight reindeer but with a suitable stoker on the back I’d reckon this would be one fast machine. One. Very. Fast. Machine.

A single glance tells you all you need to know but there’s more to it than meets the eye. Obviously with those curves it can only be carbon fibre and those fared in brakes, integrated aero bars and saddle speak volumes about it’s speed chasing intent.

But there’s one small detail that makes me think we may soon see some of this technology on ‘normal’ bikes and that’s the internal shaft drive connecting the front and rear bottom brackets. The idea even has it’s own logo dreamed up if you look at the pictures on BikeRadar which makes me think there’s a commercial future for it in some form.

Surely it’s only a short step from there to running a shaft drive right through to the rear axle to power an internal hub gear of some kind? Or a singlespeed. Now there’s a thought…