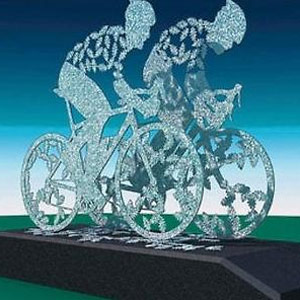 A new sculpture to recognise cycling in the Mole Valley (and in particular the 2012 Olympic Road Race later this year) is planned for the A24/Pixham Lane/Denbies roundabout after an initiative organised by Mole Valley Councillor Caroline Salmon.

Taking the form of a 2.4m x 4m representation of two road cyclists constructed from individual steel leaves it is suggested that members of the public may wish to sponsor a leaf in order to raise funds for the project.

The sculpture is has been designed by Heather Burrell who created the Cycle Leaf scuplture for the 2007 Tour de France which stands on the Rotherhithe roundabout.

At present half the £20,000 cost is provided by developer funds from the MVDC but that means a further £10,000 needs to be raised by the public, at a cost of £40 per steel leaf for the 200 required to create the sculpture.

It seems to me a great way to immortalise ourselves, either individually or as the Muddymoles as a whole with one or more leaves sponsored.

I plan to keep an eye on things and will write more when I have further details. Further reading on the steel cyclist scuplture, including some positive reaction from stakeholders and members of the public can be found on the ‘This Is Surrey’ website with road.cc also covering this story.