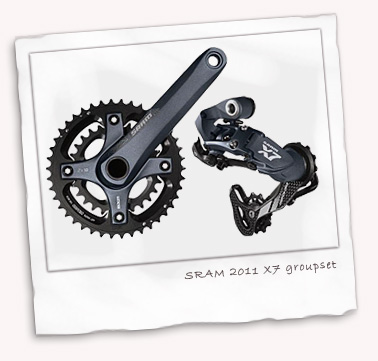 This week sees the start of the Taipei International Show and SRAM in particular have made some big moves by releasing what can almost be called an X7 family that extends far beyond the traditional groupset categorisation. And inside all of that there’s some significant announcements that show they are reacting aggressively to market trends.

First off is the news, as many will have seen elsewhere, that X7 has gone 10 speed for 2011. This means SRAM’s XX philosophy has leap-frogged directly from high-end to mainstream offerings in less than a year and signifies that X9 and X0 surely can’t be far behind.

It’s an exciting prospect as the 10 speed approach means running just a double chainring upfront which saves weight and produces fewer unusable over-lapping gear combinations. In theory the 20-speed set up has more usable gears than a traditional 27-speed system for less weight. Expect to see manufacturers offering 20-speed bikes as part of their core ranges next year.

SRAM haven’t been content to stop there though as Avid have just released details of their new Elixir 3 brakes which make the excellent strengths of previous Elixir models (believe me, I’m a big fan) available in a more cost-effective package. Not only are they cheap (just £70 RRP each end) and easy to install but they also offer reach adjustment, Matchmaker compatibility and can be fitted either way round. 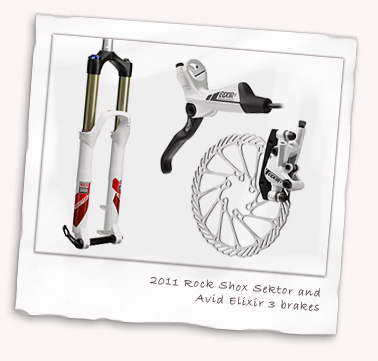 Rock Shox have also got in on the party with a new trail fork called the Sektor which uses their excellent Revelation platform as a base with a few less damping gizmos to bring the cost down. It still offers Motion Control though and up to 150mm of travel in lots of flavours – coil, air, U-turn, tapered steerers and lockouts all feature but what is most important is that there is now a 15mm Maxle option.

Of course Rock Shox feel 20mm is a better system and continue to offer this too (along with 9mm QR) but they’re quite up front about the fact that if the market says 15mm then they’ll offer 15mm. This is a significant move and I think you can expect their other forks to be following suit in short order.

With Sea Otter on the horizon in April I guess it won’t be too long before we find out about that and their plans for X9 and X0. Seems like SRAM want a quick return on their XX investment and perhaps head Shimano off at the pass. It’ll be very interesting to see how they respond…