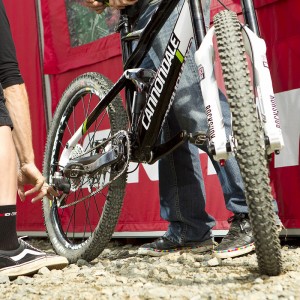 Today there’s lots of talk all over the web covering some teaser shots that SRAM has released of their new XX1 drivetrain.

Is it the big thing that people seem to think it is?

Well, that depends on your viewpoint. 2×10 has been the most noticeable change in drivetrain configuration over the past two or three years, with many riders taking the chance to go 1×10 thanks to the wider cassette ratios on offer.

Personally, I’ve wanted to for a while, knowing that if I can comfortably ride the Surrey Hills on my singlespeed then a 1 or 2×10 set-up would be fine. My only problem is the Five is optimised for a 32T chainring up front and 2×10 would throw that out; on the 1x side, I use the Five as my fast do-anything bike and this would limit things.

So, enter 1×11. Pinkbike seems to have the best analysis of what we’re all looking at today, speculating on an 11 speed cassette with ratios covering 10-42T with a 32T chainring. That’s huge! In a real world situation that would be close to 2×10 in terms of usable ratios.

SRAM also claim ‘innovative chain management technology’ and as you can see from the photo, there’s no suggestion of a chain device. Most likely the combination of the clutch on the already announced derailleur and some modification of the teeth profile will achieve this although Bikemagic have floated the out-there idea of magnetic chainrings. No, I can’t see that one either but who knows?

The only fly in the ointment is anecdotal reports from the Mole collective of short drivetrain life with the 10-speed systems currently on offer. This is only to be exacerbated by cramming in 11 speeds I guess. Oh and a 42T pie-plate on the rear wheel? Not only would the Bike Snob have a field day, but unsprung mass would take a hit too.

But this is worth watching, if only because it would give a new lease of life to my Five!