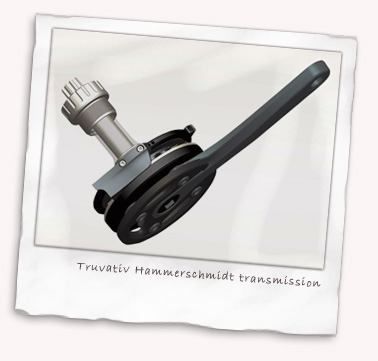 Months back I flagged up that Truvativ were working on what they called an ‘innovative shifting technology‘. Now, after much speculation they have finally announced details of the new Hammerschmidt front transmission which replaces the traditional triple chainrings with one that uses planetary gears to alter the drive ratio.

The surprises come on several fronts, firstly that the transmission has been developed for mountain bikes and not the road crowd as anticipated and secondly that it is using planetary gearing to switch the drive ratio from 1:1 to 1:6 with the push of an adapted SRAM trigger shifter.

Targeted at the All Mountain and Freeride crowd the only downside potentially (since Truvativ are not quoting figures) is additional weight and the fact it appears to be running on a modified ISIS based bottom bracket (uh oh!). Still, it’s early days and the reports I’ve heard suggest that there’s been a strong, positive reaction from manufacturers and the media. Plus bike weights have been falling dramatically and a weight increase in this area is unlikely to break the camel’s back.

On the plus side you have one tiny chainring — either 22T or 24T to give an effective 22/36 or 24/38 gear range — with loads of ground clearance, a built in bash guard and on-the-fly seamless shifting under any load. And it should suit a wide range of setups, as even in the North Downs some of us have wondered about losing the large chainring. Maybe instead of singlespeeding we might see a duospeed trend catch on? Or how about teaming it with an Alfine rear hub to ditch the dérailleur altogether?

Plenty more information about the Hammerschmidt transmission is available on the MagicMechanics website.