I saw this over on Bikemagic and just couldn’t help thinking of D’Andy, currently to be found lurking in a hill fog somewhere in the Lakes.

It wasn’t of course the sight of the ‘outdoors kind-of-guy’ you understand, poised on the lip of an imminent plunge off the side of a mountain. And it wasn’t the gnarly bike with flat pedals and some grunty looking tyres either. They’re two-a-penny across the Surrey Hills. 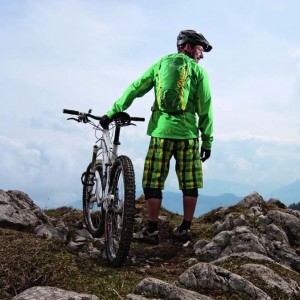 No. It was, of course, the shorts.

Now I don’t know about you but these are some seriously funky looking pants (to use my transatlantic patois). I’ve toyed with the idea for some time of some tweed Rapha plus fours as a counterpoint to my usual black baggies, but only D’Andy thus far has managed to carve his own niche in the world of mountain biking fashion.

One person’s niche is another person’s cul-de-sac but I have to say these are some seriously ‘wow!’ looking shorts. I’ve had to de-saturate the green slightly from Vaude’s press photo just to get it to look normal on-screen.

I couldn’t find them (as of Aug 2011) on Vaude’s website but I could find the Men’s Craggy Pants (great name too!) which look as though they are last year’s version. The blue and chocolate brown are impeccably loud and funky too in a last year kind of way and there’s a ‘pine’ version too.

The blurb says the come with a removable inner liner and are made with stretch inserts round the crotch, six pockets and adjustable waistband. What’s not to like? Seriously, I wouldn’t mind giving these shorts a try as I haven’t really paid much attention to Vaude up to now. They also do shorts without the plaid style but in similarly great colours.

Vaude are a company that specialises in making outdoor clothing, shoes and gear. They’re probably best known in the UK for their camping and climbing gear but clearly they’ve been busy building their biking range too.

The only stuff I couldn’t understand from the Bikemagic article was the guff about their new ‘Performance meets Ecology backpacks‘. I mean I understand the idea but really couldn’t see how it affected the backpacks they had created.

But worth checking out I reckon.