No not some strange form of MTB kinky-ness but as today was forecast to be the hottest day of the year, staying cool in the shade was the aim. 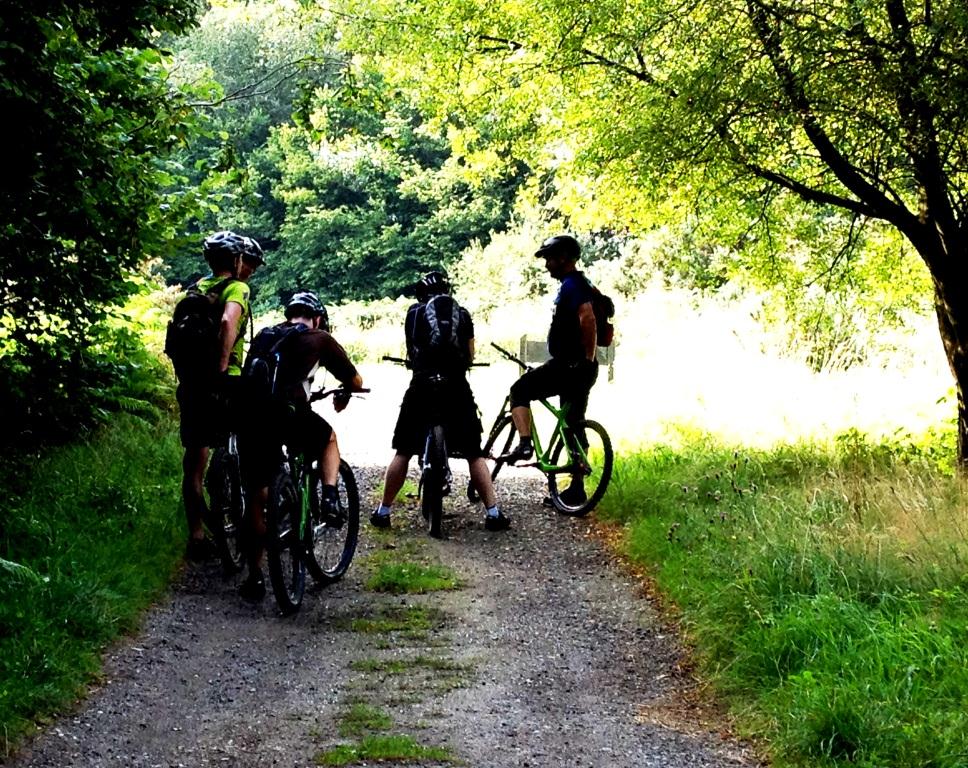 The fastest mole of the day, Jem, wasn’t coming with us but heading off down to the coast. He did have a slight advantage that he riding his Ducati 796 Monster! He just popped in to say hello before setting off.

I’d been on holiday and (whisper it) doing some road riding so it was the first real test of my recently resuscitated Clockwork Orange hardtail after 18months of it hanging on the wall. Running a new XT drivetrain (courtesy of many parts I’d seemed to have collected), SLX brakes, RaceFace chainset courtesy of Ddub, SuperStar Crest tubeless wheels, 120mm Reba’s and a Thudbuster. It felt like a new bike and with the Thudbuster (2nd hand to try out) it felt both fast and comfy, with a stretched out XC position. The Thudbuster was sort of like running your rear tyre at a low pressure, if that makes sense. 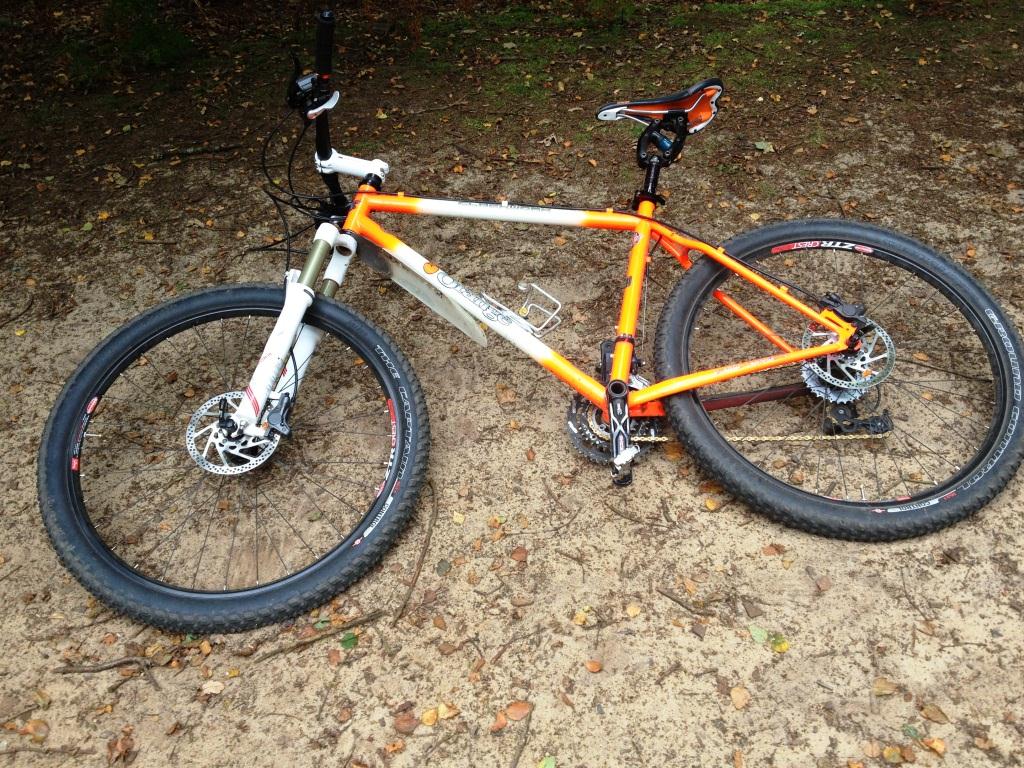 After the usual discussion of where to go, a Newlands classic loop was decided upon since this would keep us moving in the heat.

Last time I’d been out the “Hose pipe ban summer” had been in full swing but now the trails had dried out such that we hardly saw a patch of mud all ride but the sandy conditions had replaced the mud as the main technical challenge of the ride.

Andrew lead us along the Admirals trackway to Polesden where we dropped down to the Yewtress and headed up the bridleway to Ranmore. At this point I realised that I’d forgotten two things, it’s damn dusty at the back of 10 riders and after 3 weeks my legs weren’t there.

Regrouping at Ranmore we spun up to Badger run and Collarbone, both of which felt fast in the dry as Al showed how fast he can spin a singlespeed.

Next it was our usual route over to Abbas Abba where Al, DaveW and Karl made it look easy. The rest of the Whitedown complex was fast and grippy and there were plenty of smiles allround as we waited for the last riders at the bottom. Jez and James peeled off at this point.

The heat was certainly building up as we headed over to Abinger Hammer and the normally super muddy bridleways around the back of Gomshall and Shere were dry and dusty. You just had to watch out for the loose stuff on the corners (Karl).

At this point there was another route making confab at Albury Health since nobody was looking forward to riding up the white chalk of Water Lane to Newlands in the baking sunshine, so we decided on the errr… easier…? choice of the St Martha’s climb! The “rationale” being that it would be easier for some of our group to walk up in the shady woods of St Martha’s. However getting there wasn’t going to be easy. Everyone seemed to be pointing in a different direction to set off, but eventually the “steering” committee decided on a route. 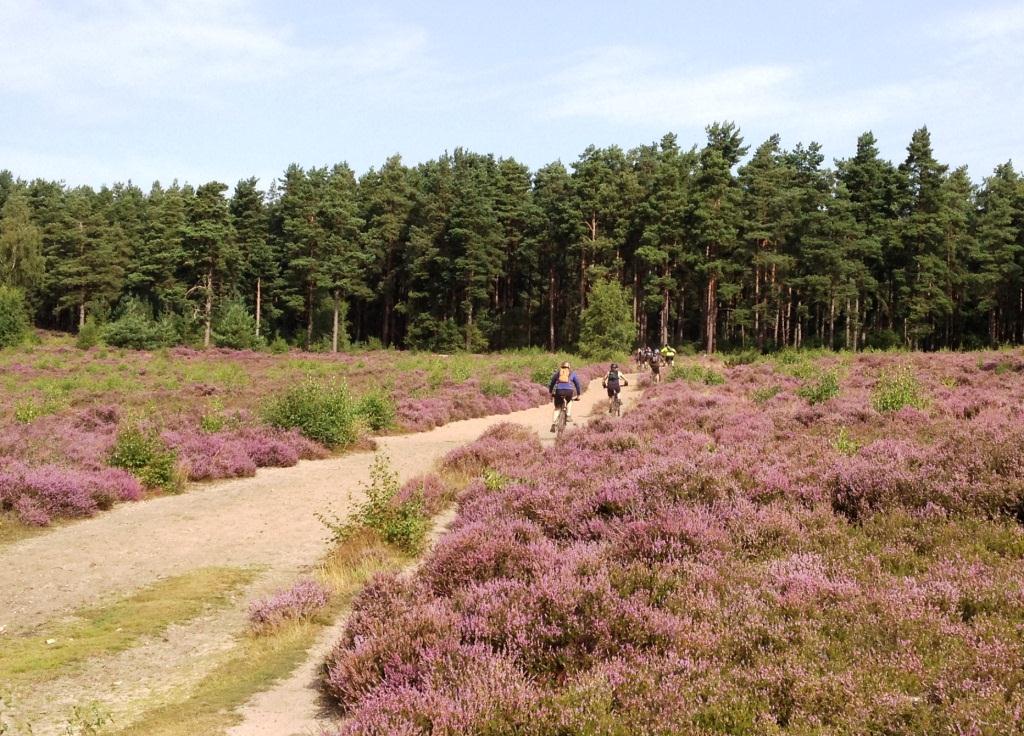 We spun off down to Ponds lane where the combination of fast descent and deep sand gave us some crossed up under steery moments. A nice buzz.

Once we got over to Farley Green MaryMark took over and lead us through a winding route over the heath, which showed his skills off until the point where he tried to go around a fallen tree next to a sunken bridleway. The loose sand caught him out and he fell down into the bridleway landing heavily. He seems to be OK. The rest of us walked around the tree!

Next it was St Martha’s where we met a guy riding it on a fixed Surly CX’er. Impressive stuff. The climb itself was far easier than when I’d last ridden it with none of the heavy mud and it was now just a grind. Taking a breather at the top, damn we were sweaty. However it was just a quick drop and pull up to Newlands corner and the purchase of the food of champions. Darts champions probably. Egg and bacon baps.

Just as we were leaving we bumped in Ray with some of the oddest looking female Triathletes we’d seen. Maybe they were a different group to his normal group.

Heading back along the North Downs Way was quick and we made good time, eventually coming out on Collarbone and Badger run, which was a big ring blast.

As we took the little climb to Ranmore we heard a distant peel of thunder. This wasn’t in the forecast. Retracing our tracks to Yew Trees and up to Polesden Lacy the thunder got louder and louder, with the heavens opening. Normally this would have been a poor end to a sunny ride, but we were all so hot and sweaty that the rain was actually very welcome, if it did make the Admirals Trackway chalk a bit slippy.

Filed under Rides in August 2012