Planned several weeks ago, this was my attempt to bribe a long-time cycling buddy of mine, Stu, back out into the Surrey Hills. Beer was the bribe! 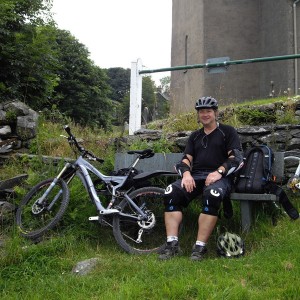 [The alert amongst you might not recognise this bench where Stu is sitting as being in the Surrey Hills, as it was taken last year in The Lakes!]

I left my house at about the same time the Moles were leaving Bocketts, only I was in a car headed to Kingston to collect Stu. We set out on the bikes from Bookham shortly before 10am, heading up Chalkpit Lane to Polesden Lacey. Conditions were variable in the lane, generally dry, with occasional sticky patches, often very sticky.

Our chosen route to Leith Hill took in the Yew Trees climb up the North Downs, and the Land Rover descent down them.  This descent was slippy, but didn’t feel lethally so even though I was on the On One 456 hard tail. Stu was riding his full-sus Stumpjumper (’07 vintage or thereabouts).

We passed Nirvana Cycles, and took in the cheeky little path past the church, running parallel with the A25.  Here I took my one and only tumble of the day, with the front wheel sliding out in the narrow gulley causing me to pinball between the sides and drawing a little blood from the shins. No modelling assignments for me this week then!

The Rookery climb is always a struggle for me with just the 8 speeds on my Alfine hub, and yes, I do anticipate justified abuse from you single speeders with 7 fewer gears. Nevertheless, I cleaned it despite looking like I was about to collapse as I emerged by the storm water grid at the top. I was quite chuffed to clean the steep and twisty sections on Wolverns Lane too, half-way towards the cross-roads at the end of the Summer Lightning trail.

At this cross-roads we took the descent through Simons Copse down to Broadmoor. This was because I wanted to scope out routes for Sunday, and I think the bridleway up from Friday Street will still be too boggy. We took the Caspers climb up to Leith Hill, stopping at the tower for a welcome cuppa and also to attack Stu’s packet of fig rolls (a cyclist’s staple).

We tackled some of the labyrinth of singletrack that covers the hill, eventually ending up on Windy Willow.  Despite the occasional gloopy patch, it was generally mud free.  But as we encountered earlier, when it was gloopy, it was very gloopy. I suffered a pinch flat as I tackled a rooty climb shortly before reaching the tower for the second time. Having fixed it, we ignored the cafe on our second passing and after Personal Hygine and a very sticky Chicken Wings/Moonbase, we decided to give the cricket pitch bomb holes a miss.  Mainly because it was now 1.30pm and we headed down the track to the Plough in Coldharbour for some ‘light refreshment’.

After a pint of Crooked Furrow (4.0% abv – well-rounded and fruity bitter) we resisted the lure of a second and headed back out to Wolverns Lane. Our next planned stop was the Stephan Langton in Friday Street, via Summer Lightning. Although any short and steep climbs caused a little indigestion, I wasn’t really feeling much ill-effect from the beer.  We both really enjoyed the fast and flowing trail, and made it to the pub without mishap *

After a fine pint of Hogs Back Brewery’s Hop Garden Gold (4.4% abv – a malty, pale golden beer with hints of banana and pineapple, with a good balance of aroma and bittering hops giving a long dry finish with a sense of sweetness) and a bag of crisps (barbecue and smokey bacon, if you’re asking), we tackled the climb back out of Friday Street, eventually picking up Wolverns Lane and the Rookery descent. I was still sufficiently in control to avoid the stump near the top, and also to brake in plenty of time for the two groups of walkers we encountered on the descent.

We took High Mediterranean up to Ranmore, heading past the church and the top of TTW3 to pick up the Golden Nugget descent to the start of Ranmore Common Road. Given our proximity to the Stepping Stones in West Humble, it was obvious where we had to head next.  Here we sampled the local delights of Tillingbourne Brewery’s Falls Gold (4.2% abv – a light and hoppy golden ale).

By the time we left the Stepping Stones, it was  dark and we had no lights. We carefully picked our way along the cycle track alongside the A24, helped by the constant stream of lights from the cars passing on the road to our right. Sneaking around the back of the leisure centre, we headed along the pavements to Cock Lane, before the quieter streets of The Glade and The Copse allowed us back onto the road for the last few streets to Bookham.

Somewhere by the leisure centre I started to think about the remaining half a packet of fig rolls that Stu still had in his pack, and by the time we were almost in Bookham I could think of nothing else. I insisted that despite being no more than 5 minutes from home, we had to finish the pack. Clearly the sugar bonk had ‘gone critical’.

The day was rounded off by a superb roast dinner courtesy of La Dandina, washed down by a bottle or two of fine red wine, accompanied by Stu and his missus (who had come to collect him and carry him home!). What a great day .. hic.

* I’m not condoning mixing alcohol and the trails, this is your own personal decision.  Stu and I are generally reasonably sensible after a beer or two (stop laughing) and are prepared to take responsibility for our actions.