After a brief debate via the forum the previous evening as to the starting point, we had 6 brave Moles layering up to keep out the early morning chill. Akak, Big Al, Kev & Gordo were waiting for me at Bocketts; and Al had spotted Jez making his way up from Dorking.  All it took to work out a route was for me to praise the improvement to the coffee served at Leith Hill tower following the recent catering change, and to confirm that the cake standards were maintained, and the Moles’ stomachs did the rest. 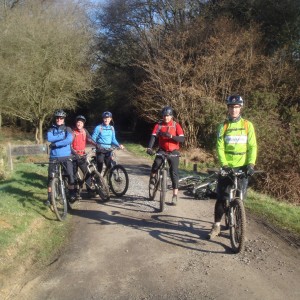 Al was on his singlespeed, rigid forked Lurcher, and had a special request that we avoid the Rookery climb up from Westcott.  So with the bright sunshine bouncing off the thick white frost we headed up the Admirals Track to Polesden Lacey and the Yew Trees climb to Ranmore.

Here we took a left and headed down the road a little way taking a right onto the Macphersons’ descent and across the railway line to the A25 via Unum.  A right turn onto the A25 followed quickly by a left onto the bridlepath besides the Bury Hill fisheries saw us pass Chadhurst Farm and up past Squire’s Farm and through Squire’s Wood to eventually pick up Wolverns Lane.  I wasn’t convinced it was any easier for a SS, but I deferred to Al’s wisdom.  I might be able to test this theory out for myself soon 🙂 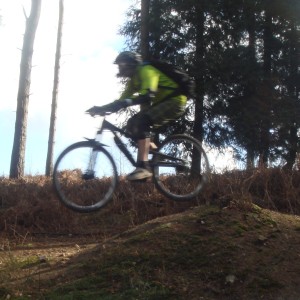 We worked our way across to Summer Lightning, where we took the fun descent towards the Tilling Springs before turning sharply left for the climb up to the cricket pitch at Coldharbour.  From here we headed in the general direction of the tower, but having had a look at ‘Bow to the wow’, most accepted the challenge with almost complete success. With the final ascent to the tower completed, it was time to sample the coffee and cake. 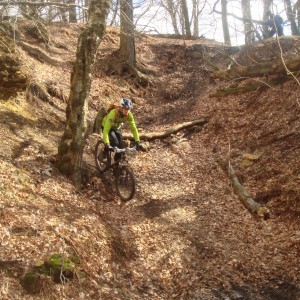 I’m pleased to report the cappuccino was, to my admittedly dubious taste, excellent; and certainly complemented the superb and decently-sized homemade Bakewell tart.  Al couldn’t resist the Beef & Ale pasty, and though not large was certainly tasty.  Jez confirmed my view regarding the quality of the flapjack that I sampled on Good Friday.  I won’t explore the politics behind the change of proprietor here, but the drinks have improved and the quality of cake remains high.  Prices are higher, however, but personally it’s a price I’m prepared to pay.

I was shown a fun route by Wobbem on Friday, Root 66; so having said farewell to Jez at the tower, five of us headed down this splendid section of Leith Hill singletrack.  I did get a bit lost, but thanks to the OS map display on my Satmap we found our way without too many detours.  I think I need to ride that route (root?) a few times before I can commit it to the ageing memory banks.

We then headed back up to the bombholes near the cricket pitch, with various options taken down and around Deliverance, before hitting Waggledance and Summer Lightning. Wolverns Lane was great fun, despite Gordo doing his best to ‘head us off at the pass’!  I have to complain about Akak’s trail manners though, as he shamelessly tried to barge me off the trail as I attempted a pass on the faster open sections before the sharp right turn at the stormwater drain for the Rookery descent.  He nearly had me off, he did 🙁

It was the easier High Med climb back to Ranmore, where with the sun still on our backs it seemed a shame not to sample the sweet delights of Golden Nugget.  We said goodbye to Gordo at Ranmore as he opted for a shorter route home, not only was he already five minutes later than promised, but he also had a rapidly softening rear tyre.

Al and I both had our thoughts on Strava times on the GN descent (I knew I would succumb to this folly eventually), and because of the sticky nature of the loose soil in the current conditions we both had some interesting sideways moments as we hooned down in a most  uncontrolled manner.  I was gutted tonight to see his best time is still 2 seconds faster than my descent today, and I bet he did that on his rigid Lurcher, too 🙁

I said goodbye to the remaining three as we hit the Admirals Track, and my Satmap showed a distance of 42.5km by the time I hit home, having been out for about 4 hours from Bocketts.  I think I earned tonight’s roast lamb dinner; and Kev, I opted for a simple Australian shiraz/cabernet to accompany it.  With three mtb rides and a rugby sevens tournament in the last four days, I will have a day off tomorrow and try and recover from this cold that hit last Wednesday.  Keep enjoying the dry-ish trails, who knows what April will bring us?