With the annual Moles dinner coming up soon D’andy I sloped a day off work to plan a pre-dinner route. What a day it was. Damn cold with the thermometer never cracking zero. 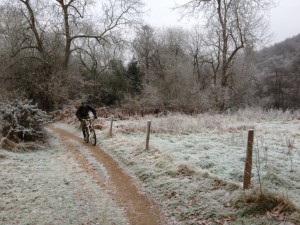 With Matt being unable to join us due to having to look after a sickly child, it was just D’andy and I meeting up at The Anchor in Bookham.

It certainly wasn’t a day for hanging around with the weather predicted not to crack zero all day. Spinning out of Bookham, past our usual Hylands garage rendevous and up to Poleden Lacy, the ground frost was completely covering everything, with the pools on Admirals trackway being totally frozen and the ground turned to concrete.

I was on my Camber 29er and with no-one (mad enough to be) out walking I let the brakes go on Yew Trees, it flew and I set an unintentional best for me Strava time. Straight on up to Ranmore, it was down Landrover with no stopping, which again was super fast, especially the second section as D’Andy blitzed it.

Next it was onto the Rookery, which was waay below zero, with some of the heaviest hawfrost I’ve seen for ages. It this point I was looking forward to the Rookery and Wolverns Lane climbs, just to keep warm! 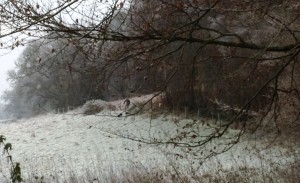 We got to the top of Wolverns Lane and Summer Lightening, with no mud the whole way up (yah!) and peeled off to ride the second downhill part of Summer Lightening. I hadn’t ridden this for ages and the ice hard bermed corners were so grippy you could lean the bike right over with loads of inside front wheel pressure. What a blast. I’m not one for sessioning but I could have ridden this a few times again, no problem.

Crossing the Tilling valley we headed up to the trails at the south west of Leigh hill tower, crossing back and forth a couple of times with Windy Willows riding its best for many months. The Tower was closed and we could have killed for a coffee. Instead it was straight off to Personal Hygiene, then over to the cricket pitch bombholes and Deliverance. Only the mini Deliverance for me and the main one for D’Andy.

The trails then took me out of my comfort zone as we headed into Coldharbour and over to the eastern side of Leigh Hill. D’Andy led the way down some knarly trails like Slaag and Pedal breaker. The trails were great but I would have preferred to have to be on my Orange 5. 120mm on the Camber 29er is still only 120mm when you hit the bigger drop offs. Some of the roll ins D’Andy rode were damn impressive. 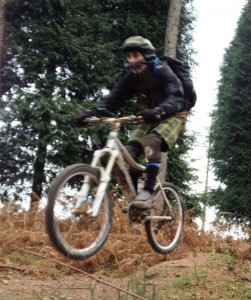 Out of the knarlly stuff and the play area it was back to Wolverns Lane, down a super fast Summer Lightening, onto to the Rookery and over to Westcott. D’Andy was starting to feel the pace and we were stopping for regular hits of Jelly Babies. High Med was a slow grind as D’Andy fought off cramps. He seemed to think that drinking 3 pints on Sunday had made High Med seem much easier then?

At the top of Ranmore, D’Andy promised me a new trail! Having ridden round here for years it still genuinely surprises me to find or be shown new trails. However Golden Nuggets, just round the corner from The There Were Three, was a cracker. A bit like China Pig in places but more downhill and definitely the best track off Ranmore.

The winch up to Polesden was painful and after only a single bar of food all day D’Andy’s suggestion of stopping in Bookham High St for a cake and coffee soon had us thinking of nothing else.

I’m not sure what the “ladies who lunch” made of D’Andy and I in the genteel surroundings or what they made of the amount of cake we ate! The Chocolate Brownie was especially impressive, not so much for taste but more for size and sheer density. A heart attack on a plate.

I feel damn luck to have had two absolutely freezing rides recently. Why? Well the conditions were the best since early summer, super fast and grippy. It was an absolute blast of a day. Did I mention that it was damn cold too?