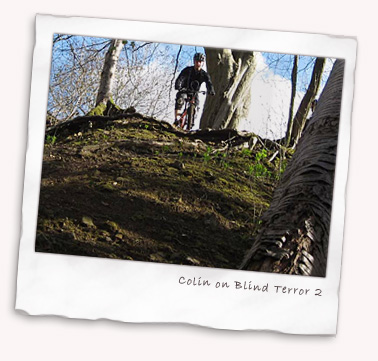 So Sunday as usual at Bockett’s Farm? Well, kind of. It wasn’t until reasonably late in the day that I realised we were meeting up with a whole bunch of riders from Diary of a Mountain Biker to show them round ‘our’ stretch of the North Downs.

So Sunday morning saw 13 riders start (of course, not all 13 were with us by the end…) with just three from the Muddymoles – shamefully just Dave, Colin and myself took the starting pistol with the rest of our clan unable to make it for a variety of reasons. Still, next time, next time.

Being good hosts we thought we’d show them what we like best – a trip over Ranmore and down past Abba Zabba, Blind Terror and what Rich refers to as Numbscull, although we’ve called it Rooty Woods before. Numbscull sounds better. It was unknown to most of the riders so it was nice to show people something new.

After that we headed back via Denbies, Box Hill and Headley to round out a lengthy 25 miles. Amazingly, I was the only one to pick up a puncture, in my inner tubed ‘tubeless’ front wheel, despite there being a high probability of another bike explosion with Dave around.

All in all, I was knackered. A bottle of cheeky red the night before, no riding fitness after the best part of a month away and some changeable (read, wet) weather conspired to wear me out. And it’s fair to say a good proportion of the DoMTB guys were pretty fit too.

I slid quietly into the house rather later than usual, hoping to pretend that by the time my wife saw me I had been in for an hour at least but didn’t get away with it. Still, Helen took it pretty well even though she might have wondered at me returning with a sore backside after meeting 12 men off the internet…

Thanks to all the folks who joined us for making it a terrific ride and hopefully we’ll get together again soon. Rich has posted some photos on the DoMTB site, there’s a video of our antics on Facebook and the ride thread is on the DoMTB forum.

Filed under Rides in April 2008