It was a select group of Moles that met up just outside Hindhead to ride MarkyMarks Black(hawk)Down loop. Or in other words those Moles who could be bothered to get up to meet at 8am in Hindhead. The “elite” / “early riser” group consisted of JohnR, Ddub and MarkyMark (our guide for todays adventures), TonyD, Big Al, KevS, Dandy (wearing possibly the most tasteless top yet and that’s saying something!), Lloyd and myself. With minimal faffage we set off on time! 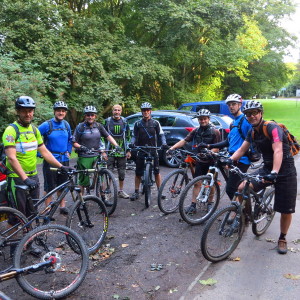 Out today were some interesting looking bikes. TonyD on a Liteville (German brand) 650b that could be adapted to run 130mm or 160mm rear travel. BigAl on a Transition 29er with what looked like a good amount of travel. Hopefully we’ll get some reviews of these machines from Al and Tony in the near future.

Rolling out of the carpark we were almost immediately into great woody singletrack that wound down the hill to Whitmore vale. It’s one of my favourite starts to a ride. Where we gave the riverside trails a miss since MarkyMark reckoned that one of us would end up in the river!

The pace was good from the off and the rain of the previous day had just kept the top of the trails moist. KevS reckoned that the trails were perfect and I didn’t disagree. The only negative recurring theme was the sudden changes of direction let to lots of group emergency breaking. I was surprised to end the ride without another rider (KevS and Al – that’s you!) ramming anyone else.

Just as we came out of the whitmore vale a sharp shower rolled in and we stopped for a quick coffee and food fill up in a roadside shop while the shower passed over. While MarkyMark considered the top shelf mags. “Tractor” p*rn. Well we were out in the countryside now!

We were off again into the woods, in a confusing (even for Markymark at times) series of trails, passing past an estate agents wet dream of houses. All of a sudden we popped out at the A3 and across more scrubby common to a little play area. A previous time we rode this particular part of the ride Karl had a bike vs bike accident here. In fact many of the noticeable route way points on this route are now where Karl has previously crashed. 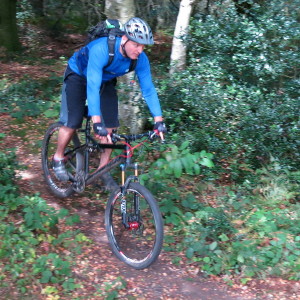 The ride gradually climbs from this point to Marley woods before dropping down to the A286 on a fantastic swoopy trail that dipped and curved round through the woods. Previously this trail and been tricky in the mud but today it was a blast.

Across the A286 there was generally more climbing until we got to castle copse. The climb here has been unrideable on previous occasions. Today the first half was a perched on the front of the saddle grind, then up the rooty second half of the climb everyone had a go but no-one quite managed it. D’Andy spinning like a F1 engine, almost made it but was defeated by the roots. I clouted a root near the top which stopped me dead and I have a blue little toe!

Once at the viewpoint near the top it was time for a break and photoshoot. The sun was out, giving a great view of the southdowns, all the way to the Shoreham gap and the sea beyond. 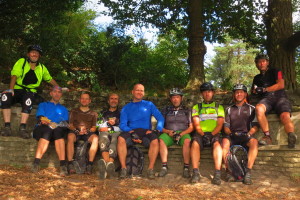 Most of us broke out energy gels or other sports foods. Although we were impressed with Lloyd bringing along a full coronation chicken sandwich.

Back along the ridge we traversed little tracks. Sometimes with less precision, as I caught my bar end and I got shot out the side of the bike down the hill!

Then it was time for the air merchants to practice on a great set of little jumps. With photographic evidence of D’Andy flying. 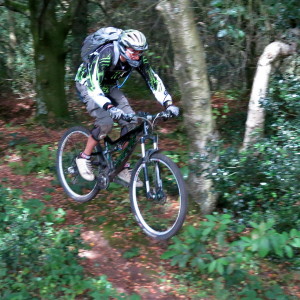 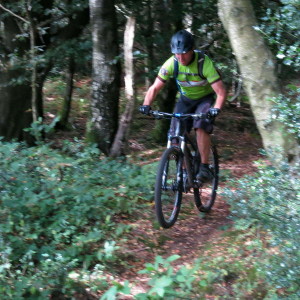 Next it was down a tricky descent (“where Karl stacked it and tried to give himself a new as*^ole”). Following D’Andy and DDub down the trail it was full on with big rain ruts, branches to catch you out and rocks all over. I was surprised to catch our down hill master D’Andy.

As we crossed over the road at the bottom the clouds darkened and the rain came lashing in. We stopped briefly but decided to press on for the last climbs of the day as legs were beginning to complain (D’Andy “Please let it end”).

As we got back up to the woods by the Devils punchbowl the rain cleared and we had a pleasant spin back to the car park.

This route is usually damn tough but even the recent rain and the rain on the day didn’t significantly impact the trails. The conditions remained almost perfect. The rain didn’t dampen our spirits either and the whole ride was a blast.