A small and (I’d like to think) perfectly formed company of Moles met for the ride in ‘late spring’ evening sunshine. Small, as for some reason inexplicable to me, a sizeable portion of the Moles preferred to utilise these superb conditions by rolling around on the tarmac rather than sampling the dry and fast-running trails that abound locally. Apologies for the quality of the photo provided, but we were happier than the photo makes us look, honest! 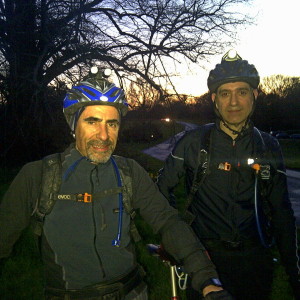 It was (whisper it) almost summer-like conditions as JR, Lloyd and myself promptly left the garage at 7.38pm. Yes, that’s right, ‘JR’ and ‘promptly’ in the same sentence. Lloyd and I had agreed a route prior to JR’s arrival, so Wiggly Wood was the first off-road action. In fact, there was some ‘off-bike’ action too, as we cleared the trail of large branches strewn across it by some disgruntled walker. I’m not sure what makes them think they are entitled to spoil our innocent fun. I wonder if they sit by the side of the road and take out the tyres of a speeding car with a rifle? Ok, so I might be getting a bit carried away, but honestly, let’s just all enjoy the countryside in the way that we want. I hardly think Wiggly Wood or any other of the trails that have suffered from this are overrun with hordes of bikers forcing walkers to flee for their lives. Rant over.

I failed to clear ‘Lee’s log’ on the way through Polesden Lacey to the Youth Hostel, and here we opted for the short, sharp shock treatment of heading straight on rather than the longer climb up the hostel access road. This should be christened, ‘Smack in the face’, after JR’s superb comparison with the longer access road climb. “One is like a smack in the face, it hurts like hell but it’s over with quickly; the other is like a gradual application of thumbscrews”. Cue much chortling.

Lloyd and JR pulled away from me on Badger Run and Collarbone, and I could detect hints of dust from their tyres shimmering in the sunshine filtering through the trees. The log pile on Trouble in Paradise was easily dispatched, as it’s so dry now and some of the top logs have started to crumble quite noticeably, reducing the overall height. It was still light when we tackled the first half of the Abba Zabba complex, and I was able to ride down and around ‘that tree’ and the Blind Terror 1 descent with no lights.

As we hit Whitedown Road, we contoured back the way we came rather than completing the remainder of the AZ complex. By now it was 8.30pm, and I gamely tried to continue without lights but a few unseen roots on Collarbone took me unawares, and not wishing to re-christen the trail CollarboneS, I decided that it was time to supplement the power of the sun with the mini-suns that are my Ay-Ups. Though in comparison with the monstrous lumens offered by some, these are more ‘white dwarf’ than exploding Supernova.

Then There Were Three was next on our radar, via the now almost dry bridleway than runs parallel with the ridge. It was only a month or so ago that this path was almost impassable due to the thick, cloying mud. We completed two thirds of TTW3 as we our route took us back up the hill via the deer gates and road at the edge of the Denbies Vineyard. Then it was back across the ridge towards Golden Nugget. Despite it being quite dark by now, according to the oracle that is Strava, I was only six seconds down on my fastest time. It was running very well indeed.

It was via Polesden Lacey and Connicut Lane that we headed back down into Bookham, about two hours and 16 miles after setting off. To take full advantage of these current conditions I really need to try and sneak a Friday early evening ride in before we (shameless plug alert – see Bike Chat & Banter in the forum) meet up in The Bell later.

I know those ‘Road Moles’ also had a great evening ride, and I hope everyone is making full use of these conditions, as none of us are confident they will last. Enjoy your riding, be it tarmac or trail.