The weather forecast wasn’t great but Four moles – Dave, Keith, Al and myself all set out this weekend with the aim of riding all 24 hours of the 2011 Mountain Mayhem.

Here’s my breakdown of how we got on! 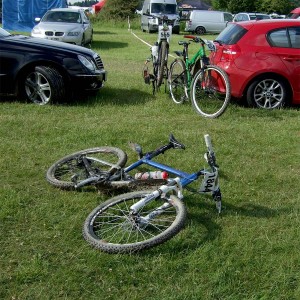 After a 5am start, Keith and I arrived on site at Eastnor Castle Deer park just before the main entrance was closed for the weekend and Dave (phone call to say that we were almost there) was waiting to show us where to go.

Dave and Al had done a fine job to set up the campsite the day before with Al’s marvelous 3 beadroom tent already errected. I’ve stayed in smaller hotel rooms! Friday had been good for Al with winning two Kenda Small Block 8 tyres at the Kenda tombola, which he seemed determined to use.

As a further bonus we were next to Andy661’s team, which meant we had a little community feel going on. The early arrival meant for a leisurely morning as we set up the Gazebo and unpacked our kit. Tactics and tyres were discussed and set. One lap per rider and Keith to take the first lap with the “unspecifed distance” run.

The Mole bikes for the weekend were an eclectic mix. Al’s hardcore SS Ibis tranny in lurid green carbon, Dave’s new big wheeled Salsa Spearfish, Keith’s bling and super lightweight Niner Air9 Carbon. Finally my non-niche, boringly 26inch wheeled, geared, steel Orange Clockwork. Although I did get plenty of comments about the bike as I rode round and talked to plenty of RetroBike geeks (obviously me not being a geek you understand, but I did spend 20mins talking to one person about early 90’s Oranges).

At 11am we headed down for the rider briefing. All was as standard rules-wise and the excitement was mounting. The 5min ride down to the start/finish handover was slightly worrying for me, as it became clear that my bike had transmission woes with a skipping/slipping chain.

In what can only be described as a “schoolboy error” I had changed my chain a couple of days before, due to it snapping on one of the recent Wednesday night rides (my “no chain” descent) and not taken out the bike for a shakedown ride. I had broken the first rule of racing – no racing on new kit/components!

Once more we headed back down to see the mass start and cheer Keith off. It was an impressive sight as the riders sprinted (well jogged for a Mole) off. An inspiring sight was to see the first rider back. An RAF team rider, showing the rest of the field a clean pair of heels by a big margin, especially good as the rider had been stationed in Afganistan until recently and only had treadmills and turbo trainers to keep fit on.

After Keith started Al, Dave and I went off for some retail therapy and fast food. Adam – Mole ride regular and race whippet, was working hard at the SRAM tent fixing rider bikes. Everyone was complimentary about the scale of the SRAM service. Later Amanda and Darren dropped by. Unusually not riding this time, since there were tapering for their next big event, a welcome visit, especially more so when they dropped round again on Sunday and Amanda brought around her delicious Brownies.

Back at camp a routine was established. The sequence was Keith, Al, Dave and me. As we sat waiting for our turn heavy showers rolled through the Eastnor Valley, interspersed with bouts of bright sunshine. Then when Keith and Al returned the talk was of a hilly, energy sapping, gloopy course.

Then it was my turn at near 4pm. I had my first taste of what Mountain Mayhem had to offer.

A short flat loop headed out of the start/finish area along the valley to the Kenda climb, which could be seen from the campsite as it zig-zagged out of the valley. The meandering made the climb a middle ring grind but a couple of steep lips made the final 100yds a power blast or short walk.

Over the top, you moved into wooded singletrack which double backed on itself. The bursts of rain had made this singletrack treacherous, with numerous slick roots ready to catch the unwary and off camber corners testing your balance. After a couple of changes of direction the route headed on to a small valley, with a short burst of flat before a brief climb lead into further woods.

These next woods were even worse than the first ones, with a muddy lane covered in treacly mud that halted all momentum, then just when your legs were slowing the track headed downhill through the trees, with an off camber slope, impossible to to negotiate without scrabbling down off the bike.

More lethal switchbacks and it was out of the woods. We headed back along the small valley along a farm track covered in more mud sludge. Finally the track headed back down to the campsite valley, again along farm tracks that needed fine balance and care, with a last section off-camber grassy slopes that washed out front wheels of the unwary.

Into the main valley, enthuastic camps of team supporters lined the route with cowbells ringing and banter a plenty. Small children lined up on the sides to high-five passing riders. The tracks crossed over in the middle of the camp via a steep 10-12ft scaffolding bridge, which required a burst of speed to get over. Next was the other side of the valley, dominated by an Obelisk on the highpoint.

The climb stepped up out of the valley, with long drags, notably a particularly nasty granny ring open crawl (well granny ring for some of us!). Once at the highpoint, we looped round and headed downhill in jeep twin tracks lined with deep wheel ruts.

Again these were muddy and slippy so you just had to choose your rut and go with the flow, although many didn’t manage that. With a couple of turns the route continued to drop along the doubletracks before heading into the woods with off camber singletrack, again needing you to thread a fine line. A long drag brought us back to the top of the hill, before heading onto more woods with dicey wet polished roots and more ruts.

A final gloopy climb lead to the descent into the campsite which was disappointingly bumpy and limited the enjoyment and speed (I was shaking so much I couldn’t see – Keith).

Finally it was a seemingly never-ending (when your legs were tired) loop under the bridge and back to the start-finish.

2011 Mountain Mayhem – how it unfolded

Throughout the day the showers continued and the course slowly became more gloopy. Al was doing sterling work on his single speed, whist Keith and I spun round. Dave was probably wishing for a lower gear than 1×9, eventually succumbing to walking up the climbs.

I probably used my granny ring during those 24 hours more than I had the rest of the year combined! Lap times of 1:10 to 1:20 were the norm. Lights had to be on after 9pm, although the light was still good and full lighting wasn’t essential in the woods until 10pm.

After 10pm the rain stopped and course slowly dried out. Although lap times lenghten as more care was needed in the dark. The Moles proceed without any mishaps (some small off’s), no mechincals and not a single puncture, which was more than could be said for Andy661 who had mechanicals, off’s and two tyre blow outs all in one lap.

At around 2am a heavy dew settled over the campsite. The part-dried course soaked the moisture up and the mud returned with a vengeance. As dawn broke each Mole had done just 3 laps. Dave and I had seriously stiff backs and a general weariness had come over the group. It was certainly a tough route with 1400ft of climbing in a 10mile loop.

By 8-9am the the course was finally getting quicker as the wind built up and the sun came out. With a quirk of the start positions I finished my fourth lap at 10am. Dave and Keith were not up for another lap, but Al “group hero” headed out again. Single speeding wasn’t too appealing and he went with the luxury of 20 gears on Keiths Niner instead. I was the only option left for another 5th lap however the stiff back had taken it out of me and although the legs were fine (my fourth lap was my fastest) I wasn’t up to it.

The final tally was 17 laps for team Muddy Moles. Not a big total but reasonable given the conditions.

A superbly organised event, at a great location, Mountain Mayhem is an event I’s thoroughly recommend. I think the Moles will return!