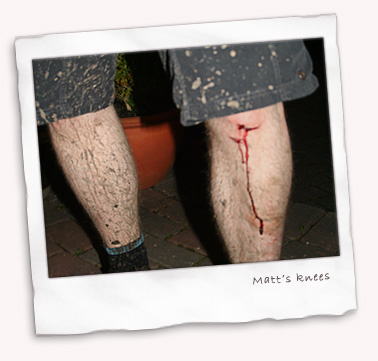 Perhaps in hindsight, heading off down a new piece of trail consisting of a combination of greasy mud and chalk, sharp flints, rooty ladders and little hops over fallen saplings, stretching out over a mile and a half of ribbon wide, looping singletrack that contoured beautifully down toward Juniper Bottom in the fading light, after a day of heavy rain was not the best idea of last night’s ride.

But what a ride it was, just me, Colin and Jez motoring along at a fine old lick and storming three steep climbs past Tanner’s Hatch, up Box Hill and finally up onto the Mickleham Gallops. Had I managed to ride uninterrupted by illness for the past couple of months I could of gone faster. I have gone much faster, but last night was as much as I could manage as my tired legs are reminding me today.

All was blissfully fine until Jez took us down a peach of a trail he knew (ahem, more of a footpath really) which starts out opposite the Best Western at Box Hill, skirting the edge of the caravan park before heading off down the valley, steep in places but entertaining throughout. Colin seems to think the DoMTB folk call it Egg & Chips, maybe someone can explain?! Colin could of course be completely wrong though…

Anyway, two thirds of the way along I was getting tired and things were getting increasingly slippery. Perhaps my bike may have been lacking some lateral stiffness or had too much vertical compliance (hat tip to the Bike Snob NYC) or perhaps I can’t ride for toffee. It amounted to the same thing, an off camber slide on some wet ladder roots that pitched me off onto some wickedly sharp flints. Ouch!

The worst part of it all though (aside from having to lift flaps of skin to properly clean the cuts in the bath) was that I have a perfectly good pair of knee pads freshly delivered from the UKBikestore at home which for some reason I didn’t manage to put on before last night’s ride. Must be saving them for Wales.

I just hope it’s true that chicks dig scars, even if in my case I’ll just end up with a strange pinkness to my knee that’ll last all summer.