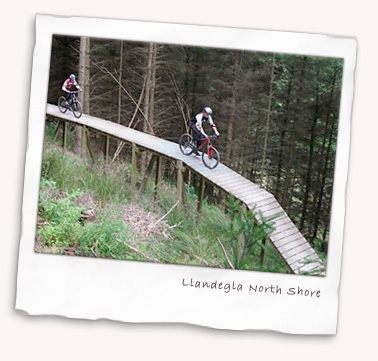 Many of us know our Welsh trail centres. Afan, Cwmcarn, Coed Y Brenin, Brechfa, Llandegla and the Marin but probably the most under the radar is the Penmachno trail. It’s 22km of some of the sweetest singletrack and it’s so far off the radar that it’s even hard to find on the MBWales website!

Even when you find it on MBwales there is no map. What are they trying to hide?

This week a mini-moles breakaway group consisting of D’Andy and myself headed off to North Wales to ride the best the trail centres had to offer, with a day at Llandegla and Penmachno followed by a day riding The Beast at Coed Y Brenin.

I guess we weren’t expecting a heatwave either as we drove up, stopping off at Wrexham for an early start the next day with Llandegla.

Llandegla was a new centre to D’Andy and I, which is always a great experience. It turned out to be a mixed morning with an oddly wide hardpacked trail out of the centre buildings, which gave way to a flowing trail, that looked like it had suffered badly with mud over the winter.

The trail was more of a swoopy nature than particularly technical, although some of the biggest bermed corners outside Scotland proved particular fun. BKB will seem diminished in comparison next time we ride it.

Particular Llandegla highlights included the jump section which D’Andy could have spent all day “session-ing” if we’d had the time. Plus the high, but wide North Shore section. This finishes with a steep-ish roll in, that is all but invisible until you are on top of it. I was glad that D’Andy was in front at that moment and his exclamation was not family friendly.

However I left Llandegla with mixed feelings since it was sometimes too well graded and prepared, if you know what I mean!

Llandegla completed, we drove over to Penmachno. The difference between the two “centres” couldn’t have been greater. Llandegla boasted all the facilities that you could want of a trail centre. Cafe, well stocked shop, bike hire and washing facilities (bikes and people). Penmachno’s “centre” was a 100m long carpark at the side of a logging road, a mile outside the hamlet of Penmachno village.

Heading off along the trail D’Andy and I didn’t know what to expect, but after a short blast of uphill fire road (to spin out the Llandegla lactate) we were into sweet thin ribbons of singletrack that contoured the hillside for miles. The trail weaved in and out of small valleys coming down the hill and the sun was blazing. Perfect!

After some further fire road and singletrack we came to my favourite part of the ride. A large open valley where you could see the trail running ahead off into the far distance.

As we headed along, the gently climbing trail began to get rockier, then as it headed down it turned into long runs of stone slabs. The bikes flew across the surface, with D’Andy and I both grateful to be running full suspension.

We paused to chat with the few other bikers that were on the trail before the trail began to head down again and we headed into a section of trail that reminded me greatly of The Wall at Afan. As you headed down undulations just seemed to build up your speed and egg us on, then just as you thought it would go on for ever you had to brake hard for a hairpin, frantically dropping the seatpin to help carve the turn, before you were off again over the speeding trail flow.

All to soon it was over and Penmachno was a memory for another day. I’ll certainly try to get back to this hidden gem!