The recent rain had lessened in frequency and the biting wind had helped to dry out the trails a little. Hence I thought that I’d forgo the dubious pleasure of riding for four hours into a headwind on the roadbike and break out the MTB. The weather seemed to have put quite a few of my fellow moles off, which was a pity for them since they missed a great morning. 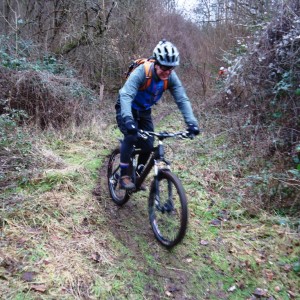 Riding up to Bocketts it was a low turn out. Markymark, Lloyd, Andrew and Elliot (keeping it real on his beautiful rigid Singular 29er). I was on my trusty Orange 5, recently refitted with a 710mm Easton Havoc bar (the same as Andrews), which gave quite a different ride feel with the extra leverage (up from 660mm and bar ends) especially on tight corners.

In a “cunning plan”, I’d bought a £35 refurbed Sony DSC-W530 camera off ebay. It’s tiny dimensions (5cm x 7cm x 1cm) meant that I could fit it into the small shoulder pockett at the front of my Camelbak and whip it out for any photo opportunities. With a bit of pratice I was stopping and taking photos without hardly slowing the ride. So hopefully many more ride report photos from me!

After a brief discussion MarkMark and I decided on a mud free (as much as possible) ride, to try and compliment out recent mudfeast rides. Hence we headed off past Roaring House farm to Crabtree lane instead of our usual Admirals trackway and Tanners Hatch climb. Then it was down to Westhumble and round to Denbies with the moral sapping concrete climb to Ranmore. Next, unusually, we headed down High Med and over to Westcott.

Into Westcott it was the short road climb to the church and the fast steppy descent to the Rookery. At this point (Tim take note) I used up all the “skill compensator” of my 150mm Revelations as I miss-timed one of the steps and left the stantion O-ring at the crown. Gulp!

Straight on it was up to Wolverns Lane and the singletrack along the side of the lane up to the crossroads. Then we took MarkyMark’s diversion left into the pine trees to avoid the mud and rejoined our normal route at the end of Summer lightening. Following some other riders we headed off  to the cricket pitch via a “new trail” through the undergrowth, not that MarkyMark was lost! Then up to the Tower, where I seem to now have the 4th best Strava time on the Tower climb?? Must be some sort of abberation on my Garmin. Although I did clean the climb no problem.

At the tower we all marvelled at how mud free we were – “the trails were almost Californian”- well someone had said it. I’d probably been too warm all day but 15mins at the Tower in the biting wind, we soon cooled us off, as we downed our drinks. As we huddled in the wind shadow another gust blew over our bikes, but it was too cold to retrieve them until we were ready to go. 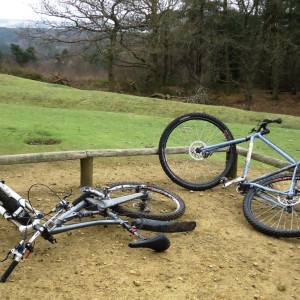 My suggestion of personal hygiene to start off again was met with “too muddy” – I think people were taking this mud-free lark too seriously! – and we headed over to the cricket pitch then Waggledance, where I again used my skill compensator 150mm travel to the limit again in one ride! It must have been the “freeride” handlebars that got the better of me.

We regrouped after Waggledance and conditions on Summer Lightening were definitely on the Californian end of the spectrum – fabulous. The bermed corners could be taken at full chat as you leant onto the end of the bars and the tyres bit in beautifully. The bottom half of Summer lightening is certainly rocky now and Elliot was doing an admirable job handling it all fully rigid. We waited for Andrew who had an unexplained tyre deflation, then we (re)took the mud free diversion to the crossroads on Wolverns. Apparently we missed a semi swamp, according to two riders that we met at the top of the rookery, that saw us divert and wondered where we were going. Back down the Rookery past some miserable walkers (completely ungrateful that we’d pulled over to let them through) it was over to Westcott and quick the whole way. 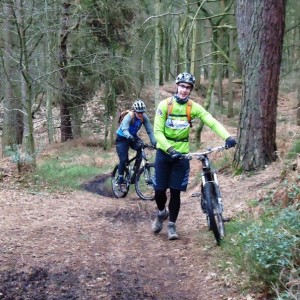 We re-traced our steps and headed up High Med (great tailwind) and onto Ranmore. Then hit a short stretch mud (!!) as was we skirted round to Golden Nuggets, which was more deep loam rather than mud, but as usual it was a skittery, off camber, low grip, joy. In the following our footsteps theme were headed to Westhumble, then Crabtree Lane and up to the Sawmill at Norbury Park. As we got towards the Sawmill there was a roadie on full 23c tires and white oversocks. I must have half expected it, since I immediately recognised it was a roadie friend, Guy from Pearsons cycles www.pearsoncycles.co.uk who is notorious for his cross country “lets try this route” semi cyclo cross diversions. Watch out for that next Pearson Cycles clubrun going through Norbury Park!

As were wheeled into Bocketts we clocked over 25miles, well apart from MarkyMark who had to ride up and down the road for a couple of hundred yards to get his 25miles! We had certainly seen the best conditions for months and rode plenty of hardpack tracks. A very good morning.