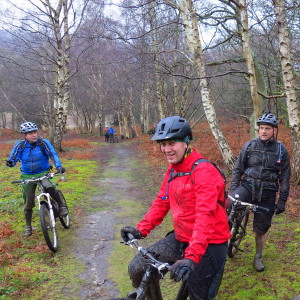 The only reason I can think that 10 Moles turned out to ride in such foul weather is that their Mole Holes had flooded!

Breaking my first rule of riding, which is “never leave the house when it’s raining”, I decided I had to get out and put some miles in rather than just fettling in the garage. I also needed to deliver JR’s new horn that had arrived too late for the offical prize giving.

I was surprised to see 10 of us as Tony, James, JR, Kev, Andrew, Al, Tony2, Tim and JonH joined me to get wetter than we already were. In order to avoid some mud we took a rather circular root via the saw mill climb and then Jem’s Favourite in reverse before a bit of road work and then across the lower vinyard track towards the back end of Dorking. The mud was thick and gloopy but we missed most of the water. 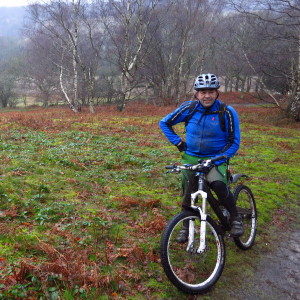 We took the bridleway up to the top of McPhersons and then took it “easy” down and across to Westcott. From there to took our normal route to Abinger Roughs and on to pop out near the Volunteer pub. We lost Timbo on the Roughs with an Avid pad spring being chewed up in his front brake. After removing the offending spring he headed off home with Tony, who is on a short leash at the moment.

The road seemed the safest bet and so we slogged out way up to the YHA and regrouped. Here Al had decided to head straight to BKB as time was pressing on a little and he headed off. In my head I had it in mind we were headed for a gnarly little descent (“dude”) and sure enough I plunged in following Al and Jon, listening for carnage behind me. Apparently none happened other than a few riders being put off by a determined lone cyclist and two collies who passed me on the later climb at some speed. 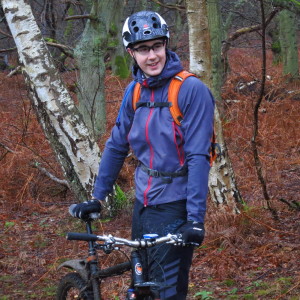 BKB was riding well and I left some gap to JR before following the other down, making the most of the excellent surface for the wet. Now our goal had been reached and we restocked on cheese straws, flapjack+ and three chocolate shortbread. 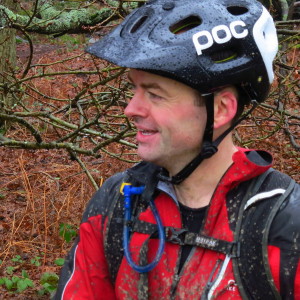 Enthusiasm was waning and were were proper wet and cold as we headed back to Ranmore taking in some road and climbing up White Down on the tarmac. Yew Trees took us down home with the final tarmac climb and Kev and I road through the carpark saying our good byes on the move, not wanting to get any colder. I’m glad I was out but please, can we have some dry weather soon?