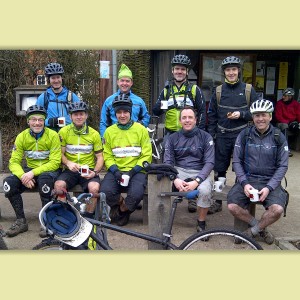 Cold. Very, very cold but, thankfully, fine and dry. That was the weather today down in deepest, darkest Surrey where the moles gathered for some riding around Pitch and Holmbury Hills. Thanks to a clear skies overnight the temperature was hovering around 2° at the Walking Bottom car park where we met for the morning’s ride.

I think I’ll end the weather report there as there’s not a lot else to say. Basically it was perfect for mountain biking, with the brisk chill making sure we kept moving. By the time we’d sorted out Jez’s puncture we had a group consisting of DaveC, Big Al, JonH, JohnR, PaulM, Keith, Karl and myself, making 9 in total.

Amazingly I haven’t ridden the area for a long time so I was feeling a bit more excited than usual at the prospect of some Peaslake trails after some gloopy Ranmore rides recently. After a late night faffage session last night I felt I had my shock pressures near right, as well as new pads in my front brake and the old ones rotated to my rear brake. The rear lever felt a bit spongy but it seemed to work!

So Big Al led us out of the car park, with several of us glowing in our new Muddymoles shirts. Yes, they’re very green but at least they are distinctive!

There followed the obligatory long climb up Pitch Hill. Immediately the sandy surface showed itself to be fairly dry but there were definitely puddles of water to contend with too. Near the top we turned left and headed for the start of Roller Coaster. Within a few hundred yards though I could feel that back brake was a bit suspect as compared to the front it needed such a long throw to work. Ah well, what can you do?

Roller Coaster was fast typical of much to today’s ride – the surface was good for some fast riding but wet roots and peaty puddles were everywhere to it was very much a case of brake in a straight line and try not to steer on the roots. I was soon enjoying putting the hammer down on the Five which – despite needing a bit of TLC; see brakes and gear cables – is basically a very well dialled bike. In particular it felt as though I’d tweaked the fork pressures just right after an alarming ride on Wednesday on less testing terrain.

Back on the fireroad there was plenty more winching to be done with the slightest incline giving JohnR the chance to scamper off ahead but pretty soon we were back into the trees again on T-0 and T-1 all the way down to the triangular green. Phew!, hard work, especially chasing Jez’s tail who remained just that fraction faster than me all the way.

After regrouping and catching our breath it was off to Death Star, Dave’s favourite I think although it’s not even on my list of fun trails. I find it a bit intimidating whereas Dave loves the challenge I think. So I was giving myself plenty of space to Karl ahead and carefully picking a clean line down the deeply walled gulley when Karl took a minor tumble as so often happens down here. He fortunately managed to spring back up before I reached him as I would have been forced to stop which meant I managed it all dab free. 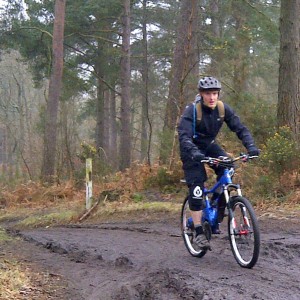 As the trail opens out I headed for the left, coming close to a couple of slow speed crashes but somehow geting away with it, avoiding the magnetic tree stump in the middle of the descent and managing to avoid Dave’s front mudguard which had popped out of the fork crown on the way down!

After crossing the road JohnR took off up the Barry Knows Best climb while the rest of us made our way up. By the first turn things were getting a bit congested so I pushed forward and settled into a rythmn for the remainder of this sapping climb. By the time I reached the Reservoir John was well-rested (an astonishing 4 minutes 4 seconds recorded on Strava) while I was best of the losers at 5:18. The rest were some way back which was some consolation considering I hadn’t really pushed it but John’s result will be untroubled for a long time.

All together again we climbed up to the start of Reservoir Dogs but soon veered away on a long, long trail, some of which might have been Surfa Rosa. In any case Big Al was flying, stringing three sections of trail together to give a really hard but superfast workout. That was my favourite of the day as the Five at times just seemed to dig down into the turns and accelerate away with so much smoothness and grip. I was buzzing at the bottom and exhausted from a really intense ride.

Next it was back up Holmbury, a brutal climb and then the long middle way up the trail that parallels Telegraph Road to pick up Yoghurt Pots. I don’t think I’ve ridden the top section of Yoghurt Pots so well as today where I managed to hook up the sequence of sandstone berms with some committed effort in the process of reeling in Dave and Keith ahead. The mid-section of Yoghurt Pots was nothing special though as tiredness started to show over those meh! roots and ridges while in the final section I had caught Keith, Dave, Big Al and Jon (who peeled off for a go at a big roll-in).

Listening to that, ‘who am I kidding?’ I ask myself. Yes it’s a buzz to push yourself but there are far better riders than me out there and some are in our riding group! 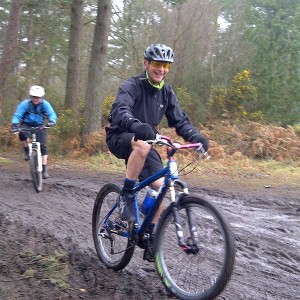 Another blast followed down Secret Squirrel and onto Telegraph Road where I followed various riders all the way down to the car park. Karl was on it and I tagged onto him at the end as he disappeared away from me down the trail at a high rate of knots.

It’s unusual for us to ride Telegraph during the course of a morning’s effort as it’s normally the last thing we do back to the cars but this time we still had a lot to do. We worked our way round some techy gulleys before a long pull across the Hill toward – ultimately – the start of Barry Knows Best again.

The Friends of the Hurtwood volunteers were out in force maintaining the start of Barrys, making us feel rightly guilty about our own lack of contribution to the trail maintenance. One of the volunteers was Louis (Uncle Riotous) who has been in touch with us in the past so it was great to stop and say Hi. Then it was off to Barrys!

As always it was fast and gnarly but we all pinned it on the way down. Well what else can you do on the way to Peaslake for some cheese straws?

The rest was welcome after what had been some hard miles so far. I’d had a fast run on the singlespeed the day before so it had taken a while for my legs to get going today but they seemed to eventually. But I needed the break. On a separate note it was great to see how many riders were out on what is after all a bitterly cold day in late January, and roadies too. Thankfully we all seem to disperse nicely once we get out of the car park and onto the Hill.

Back up on Pitch Hill for the final few miles we said goodbye to first Jez and then JohnR before slogging on toward the Windmill and Two Headed Dog which after Lloyd’s nasty dislocated shoulder recently we took plenty of care on (Karl!). After that, it was the testing MBR trail (aka Evian I think). Whatever, it is pretty technical with a lot to catch out tired riders, including a massive drop in which comes as quite a surprise.

These sort of tricky trails were still causing me a bit of concern over the rear brake which didn’t inspire a great deal of trust, never more so than on Switchbacks, the next section of trail where I was pulling the rear lever so far my fingers were getting trapped under it! I led to a couple of very near misses but I got away with it on those noodly turns.

The end was looming by now with many of us starting to feel the pace after a lot of hard riding. Ewoks came and went at speed and then it was a run across Bentley Copse and the final long bermy run down to the car park to end with a sense of relieved exhaustion.

A cracking morning of riding with a huge thanks to Big Al for stringing it all together for us and to Dave for driving me over in the first place. Great to see everyone on such fine form.

Filed under Rides in January 2012