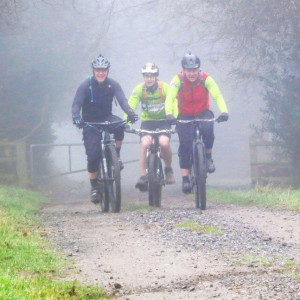 Moles may not be as interesting as gorillas but in the mist you might not notice the difference… err… no. It was a bit of a grey old morning for me to stage a come back!

The 6th of January marked the end of a ride drought for me. I had hoped to rack up some miles over the Christmas break but the only thing broken seemed to be my back! Well my SI joint was giving me enough pain to make being still very painful but better than trying to move too much. Luckily some strong painkillers from the quack and a bit of manipulation and advice from Helen and Jan at Finefettle soon had be back on track. Even so this was a bit of a test for me and I fully expected to turn off from the ride part way through.

The air was damp and the mist was thick but patchy as we set off with a mind to ride to Peaslake via Ponds Lane. We encountered deep water on the Admiral’s track out of Bocketts farm but that was the worst we encountered in terms of depth and we made our way to the top of Ranmore where we opted to miss out Badger run and instead head for McPherson’s andcome into Westcott from the East side. 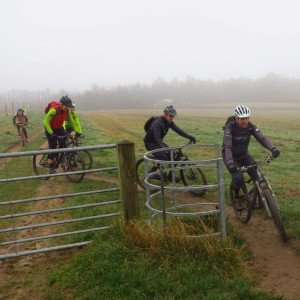 Mud wasn’t too back but with the previous year we’ve had maybe I’m immune!

We kept up our pace as we headed fro Dearleap woods and then somewhere near Abinger Roughs we regrouped and decided time was pushing on and Raikes Lane was looking like a better option. At this point Phil appeared (Ex Cycleworks mechanic and Team Kinesis Movelo rider) appeared with some mates and prompted me to shout “it’s not as bad as Mountain Mayhem” which was the last time he blasted past me at speed!

The climb up Raikes Lane does seem to have got longer though as Lloyd and I grumbled up the rear to catch the waiting pack. Passed the Volunteer pub and through the small car park we rode onwards towards the Trig point to see if YP was open. It wasn’t so we posed for a photo instead. 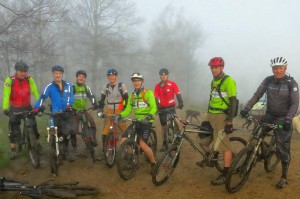 Big Al then led us on to the top of BKB via a windy route and finding much mud on the way.For some Moles who had speent too much time on 700C last year this had been a long time since their last trip down BKB. 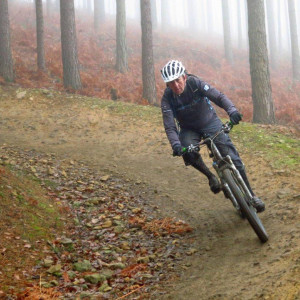 I have to say that it still rode really well, well it much have as my GPS was inaccurate enough to give me a PR and propell me ahead of JR in the rankings! 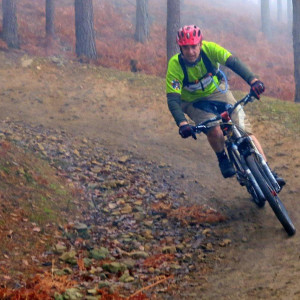 So with grins all round (apart from the odd moan from the GrandMole) we headed to the cheese straws and shortbread. Peaslake stores was a busy as ever and it was comfortable enough temperature wise not to be too worried about making it a quick stop.

The trip back was quickly interrupted by the RoadMole turning up on one of those 700c bikes but we were soon off again to hit the mud big time on the return leg. a puncture by KC gave Lloyd and myself a well welcome breather before heading up Low Med to then take in the delights of Rip Van Winkle. A first for me and one for a tad more grip I’d say! Certainly the got the better of the GrandMole who had to take a breather a few metres after the end. 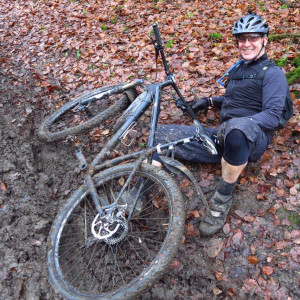 Luckily he was warm enough to wait for JR to get his camera out.

Sitting here today typing this my back seems to be fine so it’s a year of stretching for me and hopefully much more of the same quality of riding!