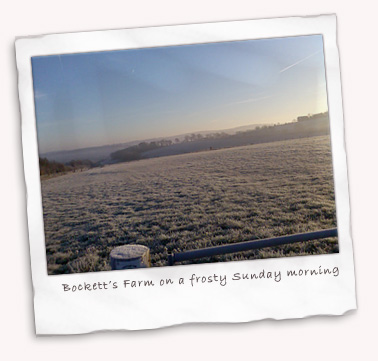 After a couple of weeks off the bike I went to bed on Saturday night hoping for anything but rain and snow the next morning. Luckily a few hours later I was presented with a classic wintry scene of heavy frost and watery sunshine. A perfect start to the day.

As usual we assembled at the car park for registration. First to arrive was new boy Dave, a long standing friend of John, who himself wasn’t far behind. Colin and Jez came into view climbing up from the farm; Jez had once again seen fit to embarrass us all and cycle over from Epsom and on his singlespeed to boot. Finally Dave C arrived, and for a change was sporting more gears than ears with his 456.

With John in attendance it wasn’t long before we made mention of doing Newlands Corner. Any sense of self-worth I had had before leaving home had obviously been frozen as I was the first to make the aging gag. Thankfully Dave, who missed my gaff, weighed in with his own version only to be greeted with chimes of Ba–Dum–Cchh (is that how you convey a comedy drum/cymbal?) Anyway after much deliberating we decided to head in the direction of the tower at Leith Hill.

We made the usual start, heading in the direction of Polesden Lacey, where it wasn’t long before the effects of Jack Frost’s work the previous night came to the fore. Hard packed trails, frozen rutted mud and iced over puddles that just screamed ‘ride through me‘.

Colin’s pathological hatred of Yew Trees saw us do a hard right at the back of Polesden which left us with the trail just known as ‘flinty climb’ (as far as I can tell) all the way to Ranmore. If ever there was an example of a track that needed a little sexing up that surely is it—Girls Aloud anyone!

We crossed the road at Ranmore and headed down to bisect the North Downs Way. It was clear that poor old Mr Frost have been given short shrift from Lord Clag of Ranmore as conditions couldn’t have been more different for a few hundred yards. General consensus from the group was that Landrover would be a better option than White Down, although not many of us probably shared that view at the bottom after a more–luck–than–judgement approach from me certainly.

We massaged our hearts out of our mouths and back under our rib cages, crossed the railway line and made short work of the road stretch over to Rookery Drive and onwards to Wolverns Lane. We all fell victim to the short sharp stepped ascent to Wolverns in one way or other. John, Dave C and myself were deposed by a lack of tread going up a step, whilst Colin and Jez were always up against it on singlespeeds, but made a bloody good fist of it.

Like a bunch of loved–up druids, we hugged the tree line up Wolverns and took the high bank trail through the mulching bracken, before descending down to Broadmoor and along the bridleway slog to the tower. Those with gears gave a shot at the final clamber up to the tower, with John, Dave C and myself scaling victorious.

At the Tower we perused the menu and most of us opted for the ‘Tower Meal Deal 2’ of tea and cake, whilst fitting new legs and lungs in some cases. It was during our little calorie intake that we realised Dave C harboured a secret desire to be a snooker referee. Trying to pass off his rather bright, white inner glove as a ‘special military issue garment’, he wasn’t fooling us in the slightest. Needless to say a plethora of snooker-based quips rang through the trees for the rest of the ride.

With bellies full and morale boosted we set off from whence we’d come and made our way over to the cricket ground before skirting the play area just beyond and wending our way over to Deliverance. None of us had really any intention of actually going through with it, but new Dave was interested to see it and the rest of us then realised what it was about it that made us think twice the last time we’d looked down it. Foul. Deliverance, four.

Instead, we traced a rather wet and muddy line over to the top of Regurgitator and picked up the rather understated Waggledance which spat us out at the trailhead to Summer Lightening. We queued in orderly fashion at the top and grouped together at the bottom, before picking up Wolverns Lane again and screwing back to the A25, via the odd cannon off a few roots.

Just down the road it was end of break. Because of time constraints Dave C, Colin and Jez opted for the road and cycle path option back home (Epsom in Jez’s case), while the rest of us ploughed our way up the trackway to Ranmore. I left new Dave and John near the church and took the descent down beside the vicarage before spinning back along the road into Bookham.

All in about 24 miles on the clock, and by the time I got in, I felt everyone. Goes to show that missing the odd ride does make a bit of a difference. Still, despite the cold start, the weather was fantastic and the hearty banter throughout the ride made for a very enjoyable trip out. Roll on next week.