Well, I haven’t done one of these for a while – so here’s a new ride report!

Actually we’ve been out a lot. As in a couple of times a week, plus Sundays and with individuals going out in ones and twos in between. It’s lead to me averaging close to 100 miles a week for the year to date (obviously that includes road miles too, but nothing like Tony recent efforts). So, a lot of consistent riding.

What’s been less consistent is writing about it. Well, something has to give and there’s been a lot of actual work for me to do too, which is less than ideal (though sadly necessary).

This Sunday we decided to meet up at Abinger Roughs to give us a head start on a familiar Holmbury and Pitch Hill ride. I am in two minds about this; some of us need to drive to trails come what may so driving to Abinger is no more a chore than driving to Bockett’s Farm. For me, I like to ride straight from my front door but doing that adds a lot of extra time and effort to a ride like this, so every once in a while – if we are heading to Holmbury – I am happy to start closer to the trails.

This time we had myself and MarkJ, Rees and his shoes, Elliot on a new Kona, Lloyd and the Prof. The trails are running perfectly at the moment but as the year marches on I plumped for long sleeves even with the knowledge it would warm up later. It was pretty chill first thing and undergrowth tends to be a problem at this time of year.

As it happened, the place where undergrowth normally get us (climbing past Paddington Farm and behind the Volunteer pub) was better than it has been, and fully strimmed at the top. So hot arms for the rest of the ride it was!

We stuck to a tried and tested route, passing Tony’s corner without incident and then climbing steadily toward the Reservoir for the start of Barrie Knows Best. I left the Prof and Elliot to scamper away from me and did my own thing, not seeing them until the bottom. Barrie’s appears to have a few unexpected shortcut lines appearing which confused me a little but it was running well as usual.

Next it was over to Pitch, starting with a long climb to take in the rather fun El Capitano at the Prof’s suggestion even if we took the slightly less gnarly option at the end. That was a first time for me down there and it is an excellent trail, one I will be keen to try again but if you are not familiar with it, expect a challenging finish. How Rees made it down on his short-travel hardtail I’ll never know!

Back to climbing, this time to the T trails, starting with T0, then T1, T1.5 and Fork Right to finish at the fireroad. This started as a strange dance among us – we started with Lloyd leading, then the Prof until he ploughed a briefly wayward path and it was left to me to reach the fire road first as kind of the last man standing.

A quick trundle back up the hill, then it was Bo Selecta and Rollercoaster back to Walking Bottom car park. My lines were a bit variable in places but I am loving my Bird Aether 9 which seems to suit me to perfection, even if it lacks the Sealy Posturpaedic qualities of Elliot’s Kona. What a range of bikes we had today, from a 100mm hardtail to a 170mm ripper! It shows you can have fun whatever you are riding. Rollercoaster in particular was pretty fun chasing the Prof even if I didn’t quite nail all the tables down there.

Another climb took us up to the Pitch Hill car park, then over the road to the sandy gulley up to begin our downhill fun once again. The only problem was the inevitable spin outs and refusals in front of me. I ended up taking a very high line to avoid Mark and my rear Ardent just couldn’t cope. Pretty soon I was lying down in the bottom of the gulley feeling a little sandy.

Once at the top we headed to the road, then over to do Otters Pocket and Super Nova back to Walking Bottom. I was flying, helped no end by having the Prof as a target in front of me but some big air was had. The Bird likes to fly even with an aging passenger aboard it seems.

We still hadn’t stopped for coffee and passing the Peaslake Stores felt a little masochistic. I can’t remember the last time we stopped there, preferring HeartWorks in Holmbury and this was where we were headed. This meant of course climbing to the top of Holmbury with warm legs rather than cramped legs from resting at Peaslake, so our policy has advantages. 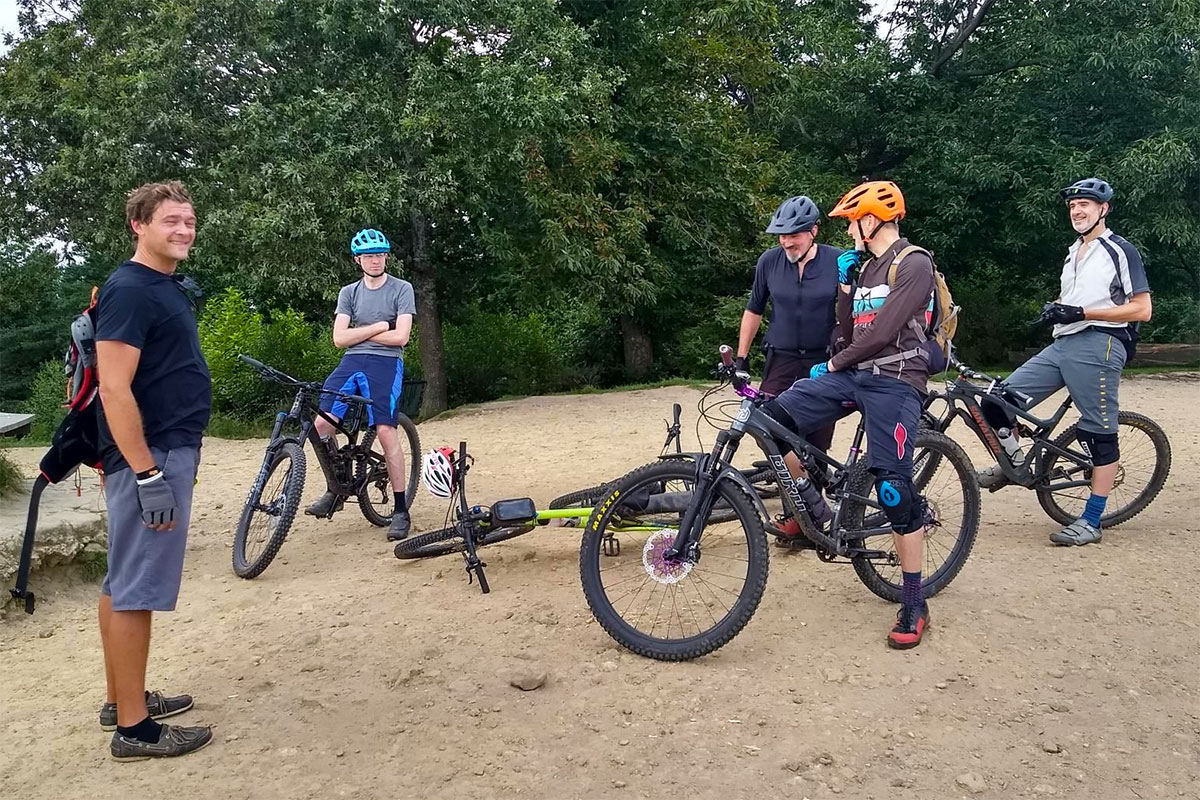 From the top of Holmbury it was – of course – Yoghurt Pots. It’s rare we don’t take this in if we are in the area but it is a tough little run that simply exhausts you by the end, especially over the choppy bumps through the last few hundred yards. I love it and it’s now very familiar, but the next trail on our route was Crackpipe and judging from Mark’s comments, it seems he doesn’t particularly care for it. Unless I was mis-reading him…

To be fair it’s not the best trail, being a heavily eroded sandy gulley down to the road made worse from heavy braking bumps. You shouldn’t aim to stop, just guide the bike round the switchbacks that can come at you quite fast, but it’s entertaining enough and at least means that coffee is nearby.

After topping up on caffeine we were into the last third of the ride. Back up past the cricket pitch, at least these 12 speed drivetrains mean you get there in the end. The Bird climbs beautifully incidentally.

We stuck to fireroads almost to the top before taking in Jackie Brown and Jerk Chicken, then Badger Run for our final proper trails for the day. All of these are fast and need effort to enjoy fully but reward with a lovely flow through the woods all the way back to the Holmbury Road. From there we just had to head back to the cars via Paddington Farm and the Abinger Roughs with just over 21 miles on the clock. Great to see everyone!

Filed under Rides in September 2021