Today we’re going to ride a trail called the Copper Mine, which is another great trail. I’ve done this once before & so has AJ. This used to be one of her training loops, but since then its under gone a major revamp with the good old digger having a good dig around and making things a lot more rider friendly for most bikers.

The loop takes around three hours with some nice long climbs, yes long climbs but hey! this is New Zealand! 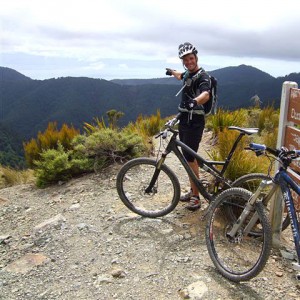 So we park the motor home up at the bottom of the hill, somewhere in the Town of Nelson. You start off on the Dun Mountain Trail which is this long long track up to the top which I’d guess must be about 950m plus.

After the short steep climb its on to Dun and up by the way of an old railway track which was used to mine copper in the mid 1800s. By 1872 the railway was decommissioned, now it’s a walkway and bike track. The track is about a car’s width in places, with some amazing views over looking Nelson Bay. A lot of locals use this as a training ride.

After weaving through native bush and hugging the hill as you head up, we make a left turn and then onto some more singletrack with small rock gardens that aren’t any trouble at all. Then its on up to Windy Ridge for a few photos in the cloud. 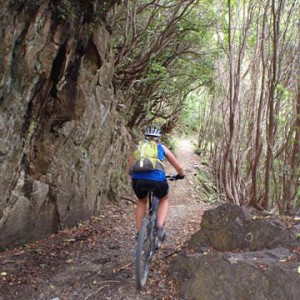 After a wee stop we head onto the downhill bit, this is where the fun is going to start. The last time I biked down here I came face to face with this little digger on a blind corner. I would have come off worse. Anyway I have a quick look at the sign which says Advance bikers only. So we both head off with speed into the berms and then it starts to get real loose and a bit sketchy in places with big rocks getting flicked up onto my down tube; not great for carbon frames.

You also have to contend with are the drainage ditches, which at speed can flick you over the handle bars with ease. I guess we must have now descended about 7-800m in about 30 minutes, which is just pure fun.

After some sketchy switchbacks and a river crossing to cool your feet its now back onto the unsealed road all the way back to Nelson, which will only take about 10 mins before we make a left and over a small hill. After almost 3 hours the small hill starts to take it out of our legs and then its the short singletrack back to the motor home when Amanda almost runs some kid over on a switchback, whoops! All good…

Then the hard bit. Pack the bikes up before the sand flys start eating us & make our way back to Takaka. We climbed over a 1000m and biked about 55km. OK, so who wants to carry our bags next year to NZ?!!

BTW, sandflys are a small black insect that suck the life out of you, they are bigger than a midge and just as pesky!

More photos of the Copper Mine trail are on Flickr. 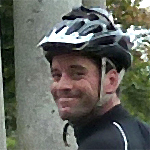