With the Sun in the sky the Moles headed over to Leith Hill but with a slight deviation in the normal route. 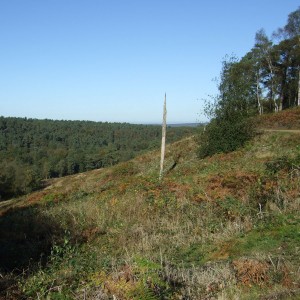 Eight Moles assembled at 8:30 and with the certain knowledge that PaulM would not be joining us today we headed off promptly with a rough route in mind. Joining me were FastAl, Kev, Matt (almost becoming a habit), Andrew, Gordon, Elliot and Lloyd. Dandy put a brief appearance in before heading over to meet the Diary boys in a quest to find new trails.

Our aim was to try and head to Leith Hill but by the best route we could find to the East of Westcott. This is a route that Matt and I had done separately many years ago but it would still be a challenge to match up what we could remember.

The beginning bit was OK and we decided that McPhersons Mount could be a descent for a change. Making swift progress we skirted around Polesden Lacey and headed up past Tanner’s Hatch for a quick tarmac blast before dodging the Sportive riders to enter the bridleway. I let FastAl head off and gave him plenty of headway as he does tend to slow me up on the big descents! ;o)

I have to commend the Five at this point for looking after me on the way down with good grip, excellent handling and Rockshox for not letting me get too airborne over the transition! Fast descent and I did appear to catch a whiff of brake pad on the way down from the rider ahead! Thank heavens for the bermed corner at the bottom.

Anyway we soon sat at the Unum entrance of the A25 and headed towards the nearest bridleway sign. I’m sure we could have found a more traily route but we ended up on tarmac for much of the way finding a sweet little bridleway at the end for a little joining section. This took us on to territory I recognised as we headed for the fishing ponds and a muddy field!

With 2 days worth of riding behind me I was last on the climbs and struggling for energy to push the extra weight of the Five up the climbs. This meant that when I joined the others at a junction I was a bit hazy as to which way to go and we took the wrong route. This lead to a bit of tarmac exploring, false map reading and some tread retracing but no Moles were harmed so that’s OK. With a little local help we made the correct turning and were then back on course. Matt was heard to say “we needed a cock with us” and I assumed, hopefully correctly, that he was referring to the Dorking variety of MTBers and Ale connoisseurs. If so, they would have known the area better than us! 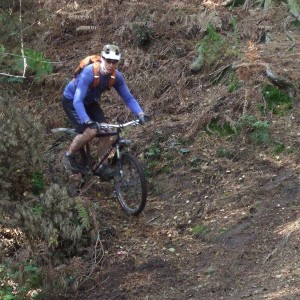 One last gully to climb and we were back on Wolverns Lane, now knowing how to get there. From here we did a fairly standard route passing Jess from Astounding Adventures where we usually do. I don’t actually believe she lives and sleeps in that section of Leith Hill but you never know…

The Tower was on us soon and a cup of Hot chocolate and a slice of Orange and Chocolate cake seemed to hit the spot quite nicely. It certainly helped as we headed back via Personal Hygiene, a “little” Deliverance and Waggle Dance before hitting Summer Lightening. Here I was aghast to find that the log seems to have been removed from the end of the first section. It could have been that it was rotten or it could have been someone who prefers their trails smooth. Get a road bike I say! 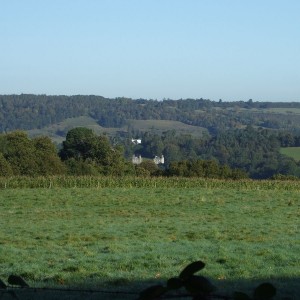 The climb up Low Med was slow for me as I lost sight of all the others but what a glorious day to be out with the Sun shining through broken clouds for most of the ride. The views were excellent and as we “experimented” with the route you could look around and easily have been in any remote, rural part of the country. Happy days.

Filed under Rides in October 2012