With many Moles opting to race at Merida Brass Monkeys last Sunday, It seemed a good opportunity for me to join up once again with Wobbem from the Diary Boys.

I’ve not ridden with him for ages, and knew he had been leading a splinter group of late, for the gnarlier and more adrenaline hungry of the Diary crew. He had posted on DOAMTB “Righto ladies, Leith and environs. Starveall cp @ 9:30; jumps, bumps and loam to roam. Bring your balls to deck the floors in Holly”

I fancied a go…

I posted my intentions to defect on the MM website, and pretty soon I was also joined by Jonesy, and Big Al. I think the later start of 09.30 proved attractive too. Sadly Dave was still suffering from a cold, and stayed at home snuggled up to his new fiery orange Salsa frame in the warm.

So, in the Starveall car park on Leith assembled 9 of us. 3 from the Muddy Moles, and 4 from the Diary, + 2 interlopers from the Dirt Devils I think? Myself, Big Al, (singlespeeding as ever) Nick, who snapped his mech hanger, Wobbem, who led, Ben, who finished early to do his curtains, Ian who snapped his cable, Richard (lonegrover), Laurent, (Fishy Bob), and Paddy, with rear mech shifting problems. 3 of us on hardtail 29ers, and the rest on 26inch suss. If it was a competition, the hardtails would have won for their hardy longevity.

The weather was expected to be very cold and clear, and true to form for the forecast, it was actually drizzly and temperate. Sloppy under wheel in parts but not quite a mudfest. Not ideal, but hey, we’re mountain bikers in England and it’s late November..

I have to be honest, I’m not the best person to write a ride report, as I can never remember the names of the trails, or indeed often, even the order we did them in. This will be then, a short and uninformative report. Apologies. I did ask Wobbem to help with the ride report. here’s his reply. “Certainly bloody well not ( you can print that ) ”

Both Rob (Wobbem) and Al, know Leith and surrounds well, and I knew it was going to be a great laugh, and not a little challenging. I wanted to check out too, with a ‘proper’ ride, how good the recent build was of my Steel Ragley 29er. I had assembled it so hurriedly and badly the week before, that on the first descent of Yoghurt Pots, a pedal fell off, the chain came off four times because I’d not used a decent front ring, and my mech hanger snapped off when the chain finally ripped into the mech on it’s inevitable last off. I put it all together a lot better for this ride I can tell you.

1st off, Rob took us up to the Tower and then hard left into all the bomb-holes and fun that lies on the north west side, the mid point was Toad of Toad Hall to Windy Willows, and I realised that on easily surmounting the steep root-fest at the top, that I was riding well and with much control… a couple of new little jumps have appeared just after it, but since we did not know about them, missed our chance.

Have to say, that the 29in Mud X I have on the back is a brilliant tyre, and it held true, while others were slewing about. No names! Quite an advantage.

Back to the top again and then down Personal Hygiene… extended. A favourite of mine. We all took different ways down, with Al and me opting for the steepish left line, and others spreading out like a fan going down in all directions. I nearly collided with Jonesy at the bottom ridge, as he was giving it his usual enthusiastic welly, and came out of nowhere… We lost Paddy for a while when we regrouped, and it turned out the hardware problems on the bikes had started, with him having shifting problems.

Next up, Moonbase… great fun, then no hanging about, a swift run through the bombholes by the cricket pitch, and onwards. We stopped briefly at Deliverance, and although I was quietly quite happy to do it, the consensus was not to, and I figured there must be some obvious fact hidden from me, as to the reason, so I moved along briskly with the others to Waggledance, and then a right hook at the bottom into Whippet.

Rob and Al don’t blooming hang about and all that pedalling was a bit strenuous… to say the least. I managed to keep up tho, till we stopped. (thank goodness for the stops). I shan’t mention where we headed off to next, (the darkside), but suffice to say, we went in as boys, and returned as men, well… some did.

Nick snapped off his hanger, and had to retire early, he was not best pleased and it’s the first time I’ve seen anger in his eyes! Ian snapped his gear cable, and ended up singlespeeding using his big ring. in fact he used the front to get two gears, which I thought very clever! Some superb trails followed, many off camber, very rooty, loamy, steep, steppy and jumpy. Loved it.

Back now, to the funster jumps just off Coldharbour Lane, and having earlier made the decision to follow Wobbem through everything he did, and having enjoyed thoroughly doing that so far, I duly followed him across the two gap jumps… whoosh… great fun, no time to think, just jump and fly.. I’m liking this bike… it’s letting me do stuff without ending up in the dirt.

Another couple of go’s on the smaller gap, with a quicker run in for lift, and then off we went to the wall of death. (hardly), then Summer Lightning 1st section, and Summer Lightning DH. What a grin. Only trouble is, the climb back up to the Tower from there is hell, even Al found finding traction tough, and he’s indomitable.

I was so tired by now I can’t really recall where we went, but there was more fun therein, last bit was Chocolate Jesus (love that name) and mostly in a downwards direction… good, very good.

Returning to the car park we were five. quite a kill rate from 9, but as I said, it’s England, and it’s late November.

Thank you Rob for a great ride, a great temperament, and being a great rider… Following you and Al certainly ups ones game. I consider myself upped. New bike didn’t hurt either, and no offs for me… A whole new era. I hope. 😯 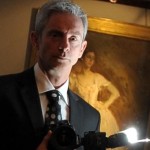