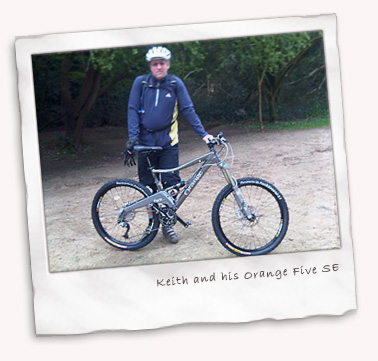 I had intended to ride on Sunday morning as usual this weekend, but seeing that cold and wet conditions had been forecast and the epic ride planned by DaveC, I thought of the cold I’d been battling for much of the week and decided to ride on the Bank Holiday Monday instead.

Keith had other plans for the Sunday (something to do with car racing I think) and was also available on the Monday, so we met up at Peaslake for an 8am start. I took my 3 year old garish green Orange 5 and Keith had his sparkly new Orange 5 SE in a tasteful Chrome Grey.

My plan for the ride was to do something along the lines of the Davebus (DoMTB) Classic 3 Hills ride, in order to get some good mileage and climbing in for the workout, plus some decent singletrack for Keith to really appreciate his 5 and a little exploring and route finding for me.

So we started off with a climb up to the summit of the first hill – Pitch. It was pretty cold with some drizzle in the air, so we moved on sharpish, blasting down the T-trails and then the gulley into Peaslake. Despite all of the rain on Sunday, the trails were in pretty good order, if a little slippy over the roots.

The next section was a climb up to Holmbury, taking the steep ramp up someone’s drive and then singletrack most of the way to the reservoir. The section of fire road we did ride had been churned up by the logging vehicles, forming an energy sapping soft sand surface.

At the reservoir it had started raining more heavily, so we cut through the woods to join Reservoir Dogs, but again the logging has taken its toll. The rain stopped by the time we got back onto the fire road and we finally emerged at the Holmbury Hill viewpoint.

We stopped momentarily on the exposed summit to admire the view and the promising looking patches of blue sky and to look on to our next target, Leith Hill, before cracking on down Yoghurt Pots. I haven’t ridden this on full suspension bike for a while and really shot through it, taking air off the humps and pumping through the dips. Keith came out of the other end complaining of not being able to get into a decent rhythm, but smiling broadly having obviously enjoyed himself and I could see that the Orange magic was beginning to work…

Next was the sketchy, brick strewn track down to Holmbury Hill Road which I warned Keith to take it easy on, and then shot down myself barely in control (do as I say, not as I do!) and then the fast descent through the laurels to Horsham Road, which saw Keith emerging chortling at the ridiculously long skid marks left by some other rider, who obviously hadn’t been expecting to see the road…

The sun had come out by now as we rode on past Upfolds Farm and on up to Leith Hill tower for a welcome tea and cake stop.

Again, we didn’t hang around for long as the wind was strong and cold and there was little shelter afforded in the doorway to the tower stairs as we chatted with some bloke who had walked up from Dorking and was about to run back, training for some insane corporate team building (more like team destroying) 24 hour endurance race.

Next we shot down the ‘Personal Hygiene’ roll-in and I took a more radical line than intended into the sandstone gully, just holding it and making it up the other side. Keith had forgotten to put his glasses on and nearly followed me down it, but thankfully noticed at the last minute and stopped to spec up.

Onwards via some cheeky singletrack to the cricket pitch and over to the top of Deliverance, where I very nearly didn’t ride down it – it really is a helluva lot easier on the 5 than my SID equipped Cotic Simple!

Next was Waggledance, Crooked Furrow (the site of my fateful overcooking of the kicker and collision with a tree stump 3 1/2 years ago, which broke my Marin Wildcat Trail frame and led to my purchase of the Orange 5) and on to explore some new (to me) trails.

At one point Keith came around the corner after I had gone over the handlebars in a deeper than expected puddle on the other side of a stump. The bike had landed upside down, resting neatly on saddle and bars and I had just got to my feet, so he initially thought I’d stopped mid trail to do some bike maintenance! We ended up back on Wolverns Lane via Cream Egg, a nice drop-off into a jump which I spotted last time I was in the area and Slidewinder, only with the aid of directions from other riders.

We were both feeling the strain by now and decided to take as direct as possible a route back, opting for Regurgitator, a push up past Deliverance and then the track to the Tower, where we saw the DOMTB lot coming from the other direction, also doing a 3 Hills ride, but a little later in the day.

Lee was first to the tower, closely followed by Davebus with his newly found climbing legs, rightly proud of his recent Box Hill climb time which happens to be several seconds faster than my best ever time (b%&^£”!!). Richard (Muddyfox) was also there and I thanked him for the tip off about the trails we had just ridden.

Off we set for the final leg to Peaslake via High Ashes, Holmbury Cricket Pitch and BKB, enjoying the sunny spells and getting to Peaslake by midday. Keith was obviously loving his new 5 more and more throughout the ride. I really enjoyed mine too, particularly relishing the now functioning forks after I gave them their first lowers service in 3 years the previous day.

It made a nice change to lead the ride and put together something that would suit both Keith and myself. Some bits were a bit gnarlier than I remembered, but Keith sensibly rode only what he knew he could do. We didn’t stop too much because of the cold, so covered quite a lot of ground in the time and it ended up being a really good workout, even though we weren’t racing up the hills.