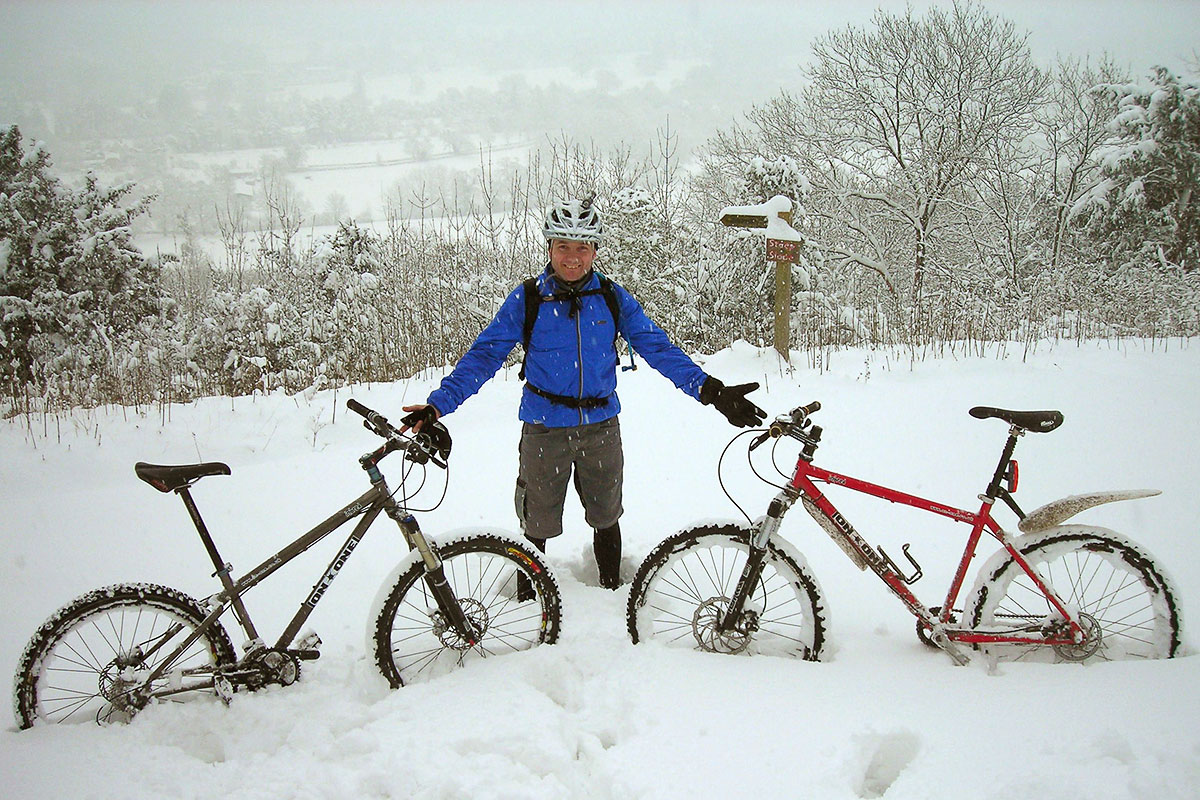 It has dumped down here the most snow for 20 years so like a couple of big kids Jem and I decided to make the most of it and see what it was going to be like to ride in the snow. How hard could it be? After all this was Surrey not the Iditarod.

Well the first thing I learnt was that the maximum amount of snow that you could easily ride through was about 4–6inches. Hence I had to carry my bike out of house and down to the road until I was on some tyre tracks. Next lesson learnt was that Trailrakers perform really well in the hardpacked snow, rapidly followed at the first corner that the thing on the right hand side of the handlebar that you pull to slow down, was going to be an optional extra today.

I rode over to Jem’s and we a little trial run in his street. His single speed Voodoo was returned for his 456 On-one as we next learnt that a high cadence was the best way to make reasonable progress. So off we went amongst loads of people walking around “you have to be crazy to be out on a bike today” and the occasional 4×4 (this is Surrey after all), to Norbury Park. Up through Bookham where the cars had polished the tracks it was cling on balance time and we soon learnt to ride on slightly more powdery stuff.

We made it up to Bocketts Farm and headed on the track to the wood mill at Norbury Park but progress was painfully slow and any movement out of the tyre tracks had us desperately trying to correct our steering. Once off the tyre tracks the gentle slope up to the wood mill became a bottom gear slipfest to make it to the top. We were both breathing really hard with the exertion and it felt strangely warm.

An additional problem was that every time you stopped, getting cleated in was really difficult as you had to try to start riding and simultaneously bang the pedals to get the snow/ice out of the cleats. Next it was along to the viewpoint overlooking the Mole Valley for some pictures. The valley was eerily quiet. Just the odd sound of people on their sledges down the slope drifting up to us. 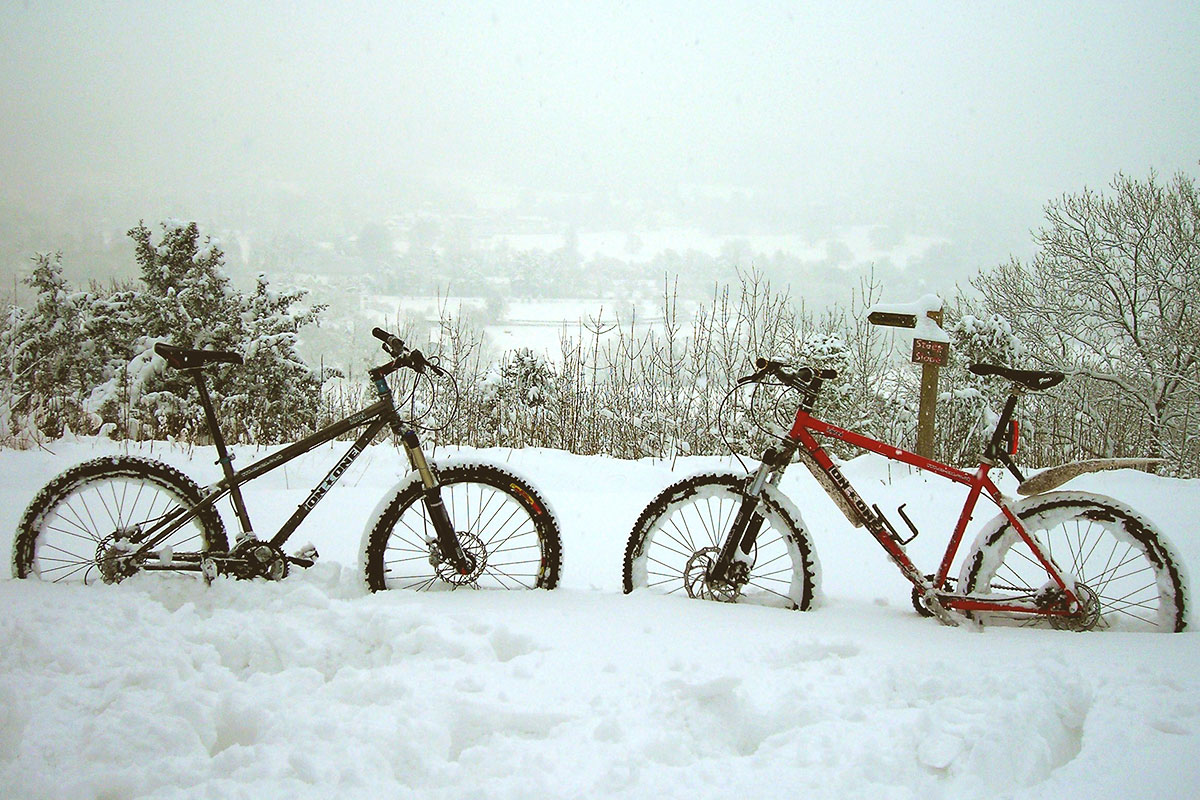 Then it was down Crabtree Lane with both of us trying to pull the longest skids. 40ft with the back wheel locked was no problem. Across to the Stepping Stones pub was like a scene out of the Alps with people in full snow board kit (with boards) standing around and many sledges littering the entrance. Across the empty A24 and over to the bottom of Boxhill. We did think about having a go at the face of the hill but pressed on. 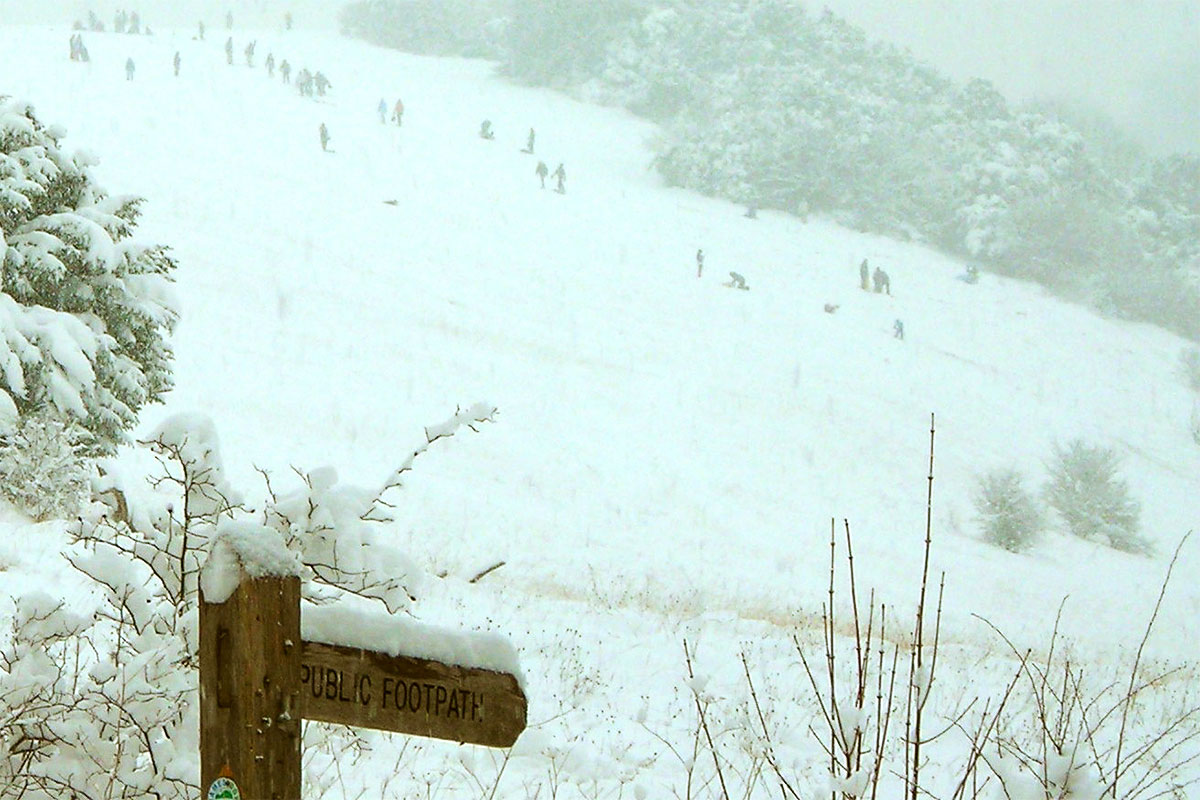 In Mickleham we met Nick (the most puncture prone man in Surrey?) who had been out with us yesterday, seemingly none the worse for wear after his big off. He’d been out for a couple of hours with his flatmate (why does no-one do SPD wellies?) and they had come down the face of Box Hill. We were impressed.

Out to the A24 at the Mickleham bends and we found out why the A24 was empty at Rykas. The road was complete gridlocked in both directions. With a slightly smug “you should be on a bike” feel it was across the road and up the switch back road to Norbury Park, where we met Graham and Andy from the Holmbury ride the week before – sans bikes! By then of course Nick was fixing another puncture.

It was a blast down the hill with the snow begining to freeze and back down into Fetcham/Bookham. Distance wise it hadn’t been a long ride, exertion wise it had but riding in the snow had been a great experience for us who see it so infrequently. Amazingly we’d had no big offs and the laughs per mile had been very high. It was kids playing in the snow all over again.