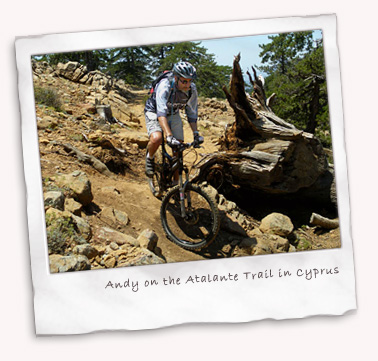 The sun was already hot as I emerged from the pool after a pre-breakfast dip, drying me off nicely before I sorted out my cycling gear and prepared for the long drive ahead to the Troodos (pronounced Tro-o-dos) mountains. These mountains are in the centre of that ‘jewel of the Mediterranean’, Cyprus, where ¾ of my family were spending a week in the sun.

I had managed to persuade Mrs. C that I was allowed a day off to get in my cycling fix, and I set off at 9.30 with 2 hours to spare for what Al Yates—proprietor of Mountain Bike Cyprus—promised me was a 90 minute drive from Paralimni on the Eastern coast.

I’d had a breakfast of muesli and sheep’s milk yoghurt, but I reckoned the extra 30 minutes would be put to good use in taking in a coffee and cake to keep me topped up for cycling at 6,000 feet above sea level.

I was glad of that contingency, as it was after 2 hrs and 5 mins that I pulled into the central square in the main village of Troodos. Fortunately Al had texted me to say he was running a bit late too, having got stuck behind a tourist (not me) on the way up the mountain. As he and his wife Kirsty had spent the first part of the morning cleaning and preparing several bikes for the next day’s guests, they needed little persuasion to join me in starting with a trip to the café.

I was their only guest for the day, as a provisional booking for a group of kite surfers had been cancelled (the wind was strong enough for them to pursue their water sports for that day). I was impressed that with only one ‘punter’ they were still prepared to put themselves to the trouble of ensuring that my plans were not wrecked by the kite surfers favourable wind.

I took collection of my Marin Alpine Trail, with the Quad-Link design that I was familiar with following my five years on a Whyte PRST4, five days on the Whyte E5 and a week of Cycleopedia’s Mount Vision demo (before my little ‘incident’ on Numbskull forced me to return it for repair). Having fitted my trusty Time ATAC pedals, we set off in the noon day sun for a 12km route that circumnavigated Cyprus’ Mount Olympus on the ‘Atalante’ trail.

Al set off first to prepare for the first photo opportunity of the day. Al takes many fine pictures of the riding, and posts a disc containing the pictures to your home address. Kirsty and I followed a few minutes later, and I mentally prepared myself for the short, steep climb followed by the rocky descent where Al would be waiting to capture my elegant riding style for all to admire.

I overcooked the descent somewhat, so instead of producing a pic worthy of the best magazines, I barely managed to avoid a small tree just to the right of the trail on the run out. I returned for a second attempt, determined to get it right this time. In an effort to corner with a little more panache, I descended too quickly, grabbed too much brake, then as most Moles would likely have predicted, I took the inevitable tumble, gashing my knee on the rocky surface. Why didn’t I bring my knee pads, doh! A third attempt was completed successfully, though style was still sadly lacking.

The trail was a combination of a wide-ish path with a dirt surface, combined with narrower sections of loose stone singletrack with outcrops of the bedrock coming through. The combination of rocky surface and steep drops to one side meant this was a fairly technical ride. Not one for beginners, though after my earlier efforts I’m sure Al and Kirsty were thinking that my claims to be an experienced rider of all that the Surrey Hills and Welsh Trail Centres have to offer were a little suspect. 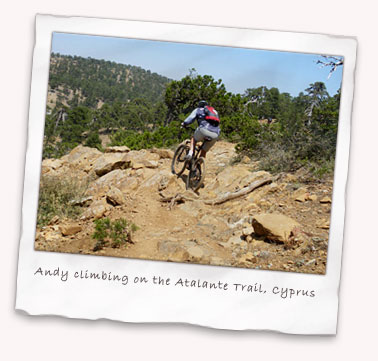 This image was probably not helped by my wearing my Whyte branded top and colour co-ordinated shorts, giving the impression of ‘all the gear, none of the go’. Pretty accurate, I hear you cry? Anyway, next stop was a fresh water spring pouring out of the hillside rocks, an opportunity for some sweet mountain water as there was nothing above us to pollute this water source. Another photo opportunity over a fallen tree appeared, and this time I stayed upright though still short of style.

The scenery was fantastic, as is to be expected of a trail on the side of a mountain this high, ridden in bright sunshine. The height and the trees took much of the heat out of the sun, and it was like riding on a warm summer’s day in the South of England. Given the heat, we took it at a steady pace, though I also suspect Al & Kirsty were still not convinced of my riding abilities.

Although the trees were somewhat more Mediterranean in variety, you could have imagined that you were riding in one of the higher Welsh trail centres on a summer’s day. After about 2 hours or so of steady riding and several photo stops we called a halt to partake of a fine picnic lunch provided courtesy of Mountain Bike Cyprus; a cheese and ham roll, chocolate filled croissant, a banana and a carton of juice (if you were wondering).

After lunch, we had some downhill action on a mixture of road and double track, passing the ski slopes as we did so. They get a fair bit of snow up here in the winter, certainly enough to have invested in a reasonable amount of infrastructure in several lifts and a fair sprinkling of snow cannons.

Meanwhile, this gun was tackling some tricky rock gardens and more photo ops before the final climb back into the village square. Although it was not steep or particularly long, you could certainly feel the effects of the altitude on this final climb. All our earlier height gains had been much more gradual and were much less noticeable.

Back in the square we stopped for a quick Fanta before heading on a loop towards the North and East of the village. This was mainly double track, with fine views over the North of the island, including a fine lake where the water had a startling green hue provided by the waste from the extensive Copper and Chromium mining that took place on the island over the centuries.

The green spoil seemed to cover half the mountain side in places, and was certainly prettier than the South Wales slag heaps or North Wales slate waste. A final climb saw us passing a UK Military listening/tracking station, one of three in these mountains, and they did not need to be listening too hard to hear my laboured breath as I tried to appear nonchalant and keep pace with Kirsty.

She was considerably younger, lighter and fitter than me, but in best customer-friendly fashion she avoided making me look too pathetic (though we had left Al behind at this point, but in his defence he’d had a late night and an early start). Back in the square, the final touch was a can each of Cypriot-brewed Carlsberg that had been in an ice box all day. A pefect end to an excellent ride, with me only just remembering to stump up the €68 as I collected my Time pedals and headed off. Darn good value for a half-day’s guided ride on some very well maintained and up to date steeds.

As well as traditional biking holidays with guided rides, Al will be offering skills courses next year in conjunction with FlatTyresMTBRoutes. All at a pretty decent rate of €450 (not including flights); can I persuade Mrs. C to let me off for a week this time?